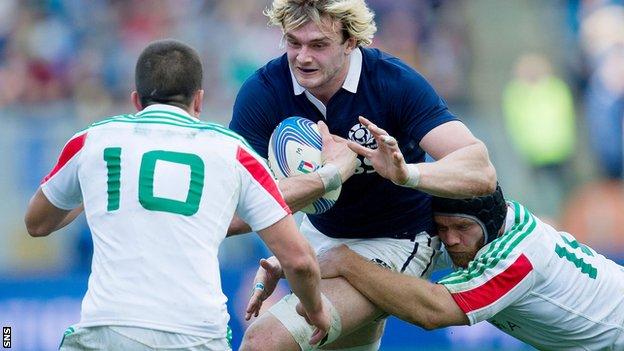 Richie Gray thinks Scotland's determination to keep playing flowing rugby was the secret to success as they claimed a Six Nations win in Italy.

The Castres lock impressed on his return to the side as they snatched a late 21-20 victory.

"That was the big focus before the game - we wanted to play rugby," Gray told BBC Scotland.

"We didn't want to go into our shells and kick away possession. So we are still trying things and they paid off."

You could see that, although it was a very nervy situation, the guys were enjoying themselves

It was not only Scotland's first win of the current Six Nations campaign but their first in Rome since 2006.

But Gray agreed with coach Scott Johnson's determination not to celebrate too much unless the Scots can show some consistency, with France visiting Murrayfield on Saturday 8 March.

"It is a good win for us, we responded to a lot of criticism and now it's a building block, but we need to set our own standards and build on from here," he said.

Scotland only clinched victory thanks to a last-minute Duncan Weir drop goal.

"It wasn't the way it was planned - we should have shut out the game sooner to be perfectly honest," said Gray.

"But, take nothing away from the win, we held on well.

"If you compare it to the game against Ireland, where we conceded before half-time and it was downhill from there, we wanted to show a lot of resolve, we didn't want to stop playing.

"In the first half, things weren't going to hand, but in the second half things went to hand and we're delighted with that.

"We spoke before the game about character. We ticked all the technical boxes, but it was about getting the emotions right.

"You could see that, although it was a very nervy situation, the guys were enjoying themselves."

Glasgow Warriors' Alex Dunbar scored Scotland's two tries but shook off Johnson's suggestions that he and Edinburgh's Matt Scott were creating what would become a "world-class centre pairing".

"It is like anything, the more you play together, the more you can read each other and it's improving every time we play," he said.

"So all we can do is keep working hard and hope we still get selected.

"There was a lot of work done by the boys inside. We created a lot and created a few gaps."

Dickinson won his 33rd cap as a second-half substitute for Ryan Grant but picked up a calf injury that is being assessed by the Scotland medical team.