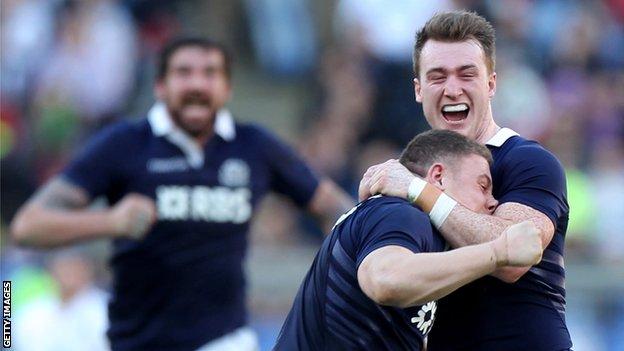 Interim head coach Scott Johnson said during the week that a victory in Rome would not paper over the cracks or disguise the fact the the national side aren't where they want to be.

But a win certainly nudges you in the right direction.

Just picture yourself in the changing room, post-match, had Duncan Weir's 79th-minute drop goal slid by the wrong side of the post.

Winning breeds momentum. Even though some positives could have been found in defeat, a victory - especially in the dying moments - is priceless for morale.

The key when analysing a performance, though, is to try to forget the scoreline, look at what worked, what didn't and how the team can improve.

The early signs were ominous as the Italians controlled the scrum and looked dangerous on the ball, creating good go-forward.

They defended well, committing very little in numbers to the breakdown, chopping the Scots low and hard and resetting quickly. Steve Walsh penalised Scotland heavily too, mainly at scrum-time, and they were on the wrong side of a 10-2 penalty count at half-time.

Walsh was imposing the directive of a sterner line on the "jackal" player holding his own bodyweight - something that is rife in the game - but the consistency of interpretation seemed slightly off, which frustrated captain Greig Laidlaw. In attack, Scotland looked slightly one-paced into contact.

A simple solution to this is to hold depth a touch more. When you are concentrating on catching the ball up in the face of the defence, you will inevitably lose some pace, so holding your depth allows you to take the pass and get the knees up and take the ball into contact on your own terms.

There is a difference between this general phase play and playing "through the line" when there are spaces in the defensive line when you can flatten up.

I thought that I would have to base my column on "championship minutes" again due to the Scottish propensity of conceding tries in the five minutes before or after half-time.

It was all too easy in the 38th minute for Italy as Sergio Parisse beat Chris Fusaro to the jump off the back of the scrum and Tomasso Allan scored with five Italian men still free on the outside. Scotland will have been disappointed with the ease with which the try was scored, with speed of reset the main area of concern.

Scotland were still in the game, though, mainly through possession gained from their much-improved line-out - and from disruption of the Italian line-out. It seemed as if this area of Scotland's game had been stripped back and simplified. It almost seemed easy.

Wherever it was on, they threw it. Bizarrely, they were often won unopposed.

The second half was full of positives. There was an edge about the defence, which was probably too passive in the first half, and they dominated possession. There were times when it felt a bit like the first half of the 28-6 defeat against Ireland, with Scotland just lacking that killer punch, but the use of the bench was key.

With Dave Denton coming on, together with Johnnie Beattie and Richie Gray - who were both outstanding - there was balance and variation in the carriers. There were more tight plays as the Scots looked to take yards, recognising that the Italians weren't committing at the breakdown.

Max Evans also entered and the positive message from coach Johnson with these two substitutes seemed to be: "We're getting possession but need some x-factor." Chris Cusiter later added spark and energy and all these factors helped.

As the cleverly-timed Scottish substitutions were key; conversely, the complete substitution of the Italian front row seemed premature and took away their scrum dominance.

With these positives, Scotland will have been mystified to be two points down with three minutes to play.

Yet Italy are a very competitive side and scored a fantastic team try with 10 minutes to play. Matt Taylor, Scotland's defence coach, won't be happy with the reset for the last phase, though.

Clive Woodward's phrase of "thinking clearly under pressure" (TCUP) was highlighted as four Scottish players marked no-one on the blindside, while the spacing around the ruck was too tight and Sean Lamont and Duncan Weir didn't mirror each others actions.

If that was an example of poor TCUP, then the last two minutes was the opposite.

Scotland worked themselves into great position, just to the left of the posts for a right-footer, put good blockers in place and Duncan Weir executed the drop-goal to perfection.

Duncan Hodge, backs and kicking coach, will have been delighted with the outcome. He will have prepared for this scenario many times on the training pitch.

So, had the drop goal missed, would the review have been the same? Well, we probably would've lingered more on some opportunities that went unconverted, but generally I felt positive watching the game.

I could see areas that were being developed, such having two waves of attack and getting the back three on the ball at first receiver. Individually, the little things that Matt Scott did on the ball were impressive, such as tip-on plays under pressure and the slight straightening of the line for Dunbar's first score.

Scotland will be a lot more upbeat this week. They weren't perfect, but there are some real positives to work off.

There is some tinkering to be done. But I can assure you, it's a lot easier to do having won the game.