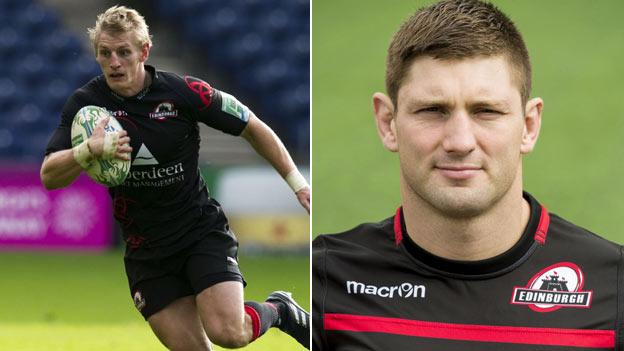 Edinburgh's Ben Cairns and Steven Lawrie intend to enter coaching after announcing their retirement from rugby through injury.

Centre Cairns, 28, and hooker Lawrie, 30, have both been unable to overcome knee injuries.

Cairns said: "On one hand I'm relieved. But then, when I made the call and walked out of the changing-room for the last time, it felt really sudden."

Lawrie said he was "gutted" to retire when he was reaching his prime.

Cairns joined Edinburgh from Currie RFC on a development contract in 2004 and made his debut two years later against Leinster at Murrayfield.

Having represented Scotland at every age-grade, Sevens and 'A' level, he broke into the senior national side in June 2008, appearing in the first Test defeat by Argentina before playing a crucial part in the victory over the Pumas the following week.

He agreed a new three-season contract in May 2010 and made his 100th appearance later that year, before writing himself into the record books when his ninth Heineken Cup try made him the club's top try scorer in the competition.

However, his playing career was curtailed by injury following 116 club appearances, 25 tries and seven Scotland caps.

"My ACL [anterior cruciate ligament] injury came at a really bad time, just after I wasn't selected for the 2011 Rugby World Cup, and I feel like my prime was taken away from me," said Cairns.

"As a kid, the one thing I wanted to do was play for Scotland and I lived that dream.

"I really enjoyed my time with Edinburgh Rugby and feel like I did a lot, but there is still more I would have liked to achieve.

They leave us with incredible experiences and memories earned from representing their local club at an elite level and, of course, realising a dream and playing for their country

"I'm keen to pursue coaching as much as I can. I'm really enjoying it at the moment at this level and I'm keen to see if that continues as a career option."

Lawrie joined Edinburgh as an apprentice in 2005 and moved on to a full contract two years later. He made his debut as a replacement in the Celtic League victory over Leinster at Donnybrook in 2007.

The hooker made 46 appearances for Edinburgh and made his Scotland debut against Samoa in Durban last year, the last match of his professional career.

"I'm gutted to bow out at a stage where I still feel like I'm just reaching my prime as a hooker but, being philosophical about it, I had the opportunity to do a job I absolutely loved for eight years," said Lawrie.

"I was always looking forward to the next game and would have liked to have kicked on after getting my first cap for Scotland."

Edinburgh head coach Alan Solomons said it was a shame that both players' careers had been cut short.

"However, they leave us with incredible experiences and memories earned from representing their local club at an elite level and, of course, realising a dream and playing for their country," he said.