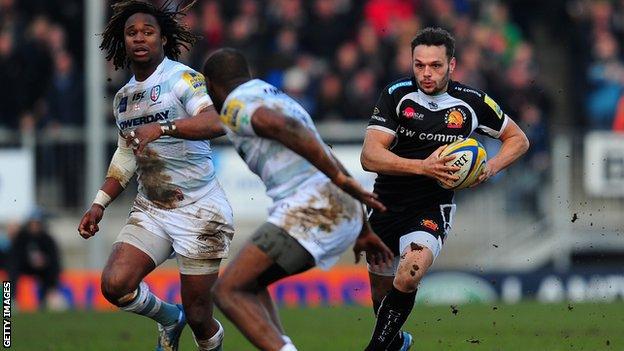 The hosts led 6-0 at the break thanks to two Henry Slade penalties.

Early in the second half, Phil Dollman then extended their lead with a try that Slade converted in off the post.

The Chiefs were reduced to 14 men when Ben White was shown a yellow card, before Ian Whitten crossed late on to seal a much-needed home victory.

After being handed a rare league start, England Saxons fly-half Henry Slade put his team ahead with two simple penalties.

Exeter's 18-0 victory over London Irish is the first time that the Chiefs have kept a clean sheet in the Premiership.

When the Chiefs pulled down a driven line-out, Australia international James O'Connor was handed his first, and last chance of the match but his attempt rebounded off the upright.

Irish came close when Shane Geraghty charged down a Matt Jess clearance, but the ball ran dead, while Exeter's best chance of the first half came when Dollman scythed through the centre, but his pass to Jess went behind the flying winger with the tryline at his mercy.

It did not take Dollman long to atone for that error after the break when he finished off a counter-attack to score Exeter's first try of the afternoon.

Full-back Topsy Ojo failed to find touch and, when the ball was run back, opposite number Luke Arscott was on hand to give the scoring pass.

The visitors' day was summed up when Slade's conversion went over, this time with the help of the post.

it was probably a game too far for us. I've asked the same boys to go into battle for the last eight weeks

Tom Johnson gave England coach Stuart Lancaster a timely reminder of what he can do with a fine performance, but his back-row colleague, Ben White, offered the visitors a glimmer of hope when he was sinbinned for an illegal tackle on scrum-half Darren Allinson.

But the Exiles failed to take advantage, spurning a great opportunity when hooker David Paice decided to try and go on his own with O'Connor screaming for the ball outside him.

Moments later and Arscott turned provider again, this time for centre Ian Whitten to cross to give the hosts an unassailable lead and their first win in the league since before Christmas.

The Chiefs will no doubt take confidence from this return to form ahead of next week's LV Cup semi-final at Bath.

"It was the perfect tonic, although it wasn't the perfect game and we have stuff to work on. But to keep another Premiership side to zero is a pretty good achievement because it doesn't happen very often.

"It was a huge credit to the boys after all the work that they put in this week and transferring that to the pitch.

"Keeping your line intact, when you are under pressure - as we have been for the past few months - is a great achievement. Our defensive discipline was good and that makes it difficult for the opposition.

"We took a bit of gamble through the Amlin Challenge Cup and LV= Cup matches because we really wanted to make a dent in this block of four Premiership matches.

"We got a good start but I thought we may run out of juice with a small squad.

"Take nothing away from Exeter. They outplayed us in the tackle and managed the conditions very well. But it was probably a game too far for us. I've asked the same boys to go into battle for the last eight weeks essentially but, in some areas, we are wafer-thin at the moment."