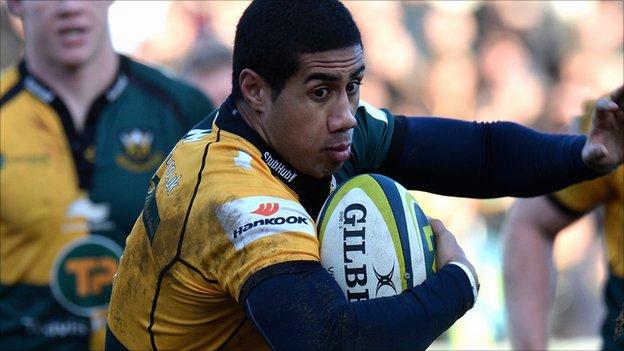 Northampton Saints moved back to the top of the Premiership with a five-try victory over Gloucester.

Saints led 13-10 at the break, after Ken Pisi's try was converted by Stephen Myler, who added two penalties.

Gloucester responded with a try from Henry Trinder, converted by Freddie Burns, who also kicked a penalty.

But Calum Clark, Tom Stephenson and Alex Waller all crossed to secure a bonus point before Will Hooley rounded it all off with the Saints' fifth try.

Northampton had been replaced at the top of the Premiership by Saracens, following their victory over Bath on Friday night. But it took them only a minute to make their intentions known with Pisi collecting a loose ball in his own half before touching down under the posts.

Myler converted but Gloucester responded in similar fashion with Trinder intercepting a Northampton pass as they threatened to cross before sprinting the length of the field to score.

Burns converted before trading penalties with Myler, who just before the break made it 13-10 with his second three-pointer.

Burns levelled after half-time but Northampton soon took hold of the game.

First Clark powered over from close range with a pick up and drive before Stephenson scored a superb individual try, swerving and sprinting through the Gloucester defence.

Myler converted both to stretch the advantage to 27-13, before Alex Waller crossing late on to earn a bonus point, while Will James was also sin-binned for Gloucester.

In the dying moments, Hooley added gloss with Northampton's fifth try which Myler failed to convert - his first miss of the game.

"I was really delighted to see Ben Foden back. He was particularly sharp.

"I think the replacements did a really good job. It was a question of looking after the ball and continuing to apply pressure.

"We were guilty, particularly in that first half, even though we created chances, of trying to force the ball."

"We didn't impose ourselves on any aspect of the game. I'm really disappointed.

"We were inaccurate. We gave away sloppy penalties, and you can't afford to do that against a team of this quality.

"The most disappointing thing for me is that we didn't have control in any single aspect of the match."