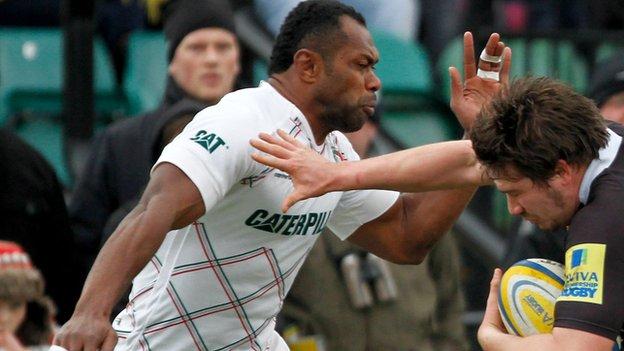 Premiership champions Leicester had to come from behind to beat struggling Newcastle at Kingston Park.

But Owen Williams kicked two of his five penalties before Goneva crossed to earn Leicester a 14-13 half-time lead.

Leicester's bonus-point victory lifts them back up to fourth, level with third-placed Bath - but still 15 points adrift of leaders Northampton, with six matches of the league season to go.

Williams added two conversions to his three penalties for an individual 19-point haul.

Former England fly-half Toby Flood came off the bench to add the Tigers' final conversion before being yellow-carded for a deliberate knock-on as, having just lost returning England centre Manu Tuilagi, the Tigers finished with 13 men.

Tuilagi will link up with Stuart Lancaster's squad on Monday fresh from making a successful return to Leicester duty after five months out of action with a chest muscle injury.

He had a quiet day cut short when he was sin-binned in the 70th minute, also for a deliberate knock-on - one of three yellow cards for the Tigers, who had earlier also had scrum-half Ben Youngs temporarily removed from the field by referee Greg Garner, once again for knocking on as he tried to intercept.

However, there was enough in Tuilagi's performance to suggest that he could return to the England line-up against Wales at Twickenham next Sunday if Lancaster decides to take the risk.

Newcastle remain second from bottom, now only 11 points clear of backmarkers Worcester, who picked up only their fifth bonus point of the season in Saturday's narrow defeat at Harlequins.

"I'll have to have a look at those yellow cards. He was quick to get his cards out, but I'm happy with the result.

"I'm happy to be where we are in a season where we have played rubbish, to be honest."

"I was excited to be back and wanted to play the whole 80 minutes. I felt pretty good out there after all the training I have been doing. I've worked hard to get myself back to this point.

"I was pretty nervous and excited at the same time - just to get out there and get the feel of the rugby ball in my hands and to play again. It took a while for me to get the ball but I was straight back into it as far as defence was concerned.

"I'll be going down to training with the England boys and we'll take it from there. If Stuart Lancaster asks me if I'm ready to play I'll say 'absolutely'."

"We said at half-time we were getting absolutely nothing from the referee. He was very inconsistent in his decision-making so we had to be squeaky clean and we gave away two silly penalties away which they kicked and that just made it a little more difficult for us.

"We did play some good stuff in the first half and in the right areas of the field and we didn't do that in the second half.

"You only have to look at the quality of the side we were playing today. They have so many players to call on including those on bench.

"The boys fronted up and I thought we played pretty well. It's just a shame we let it slip in the second half."