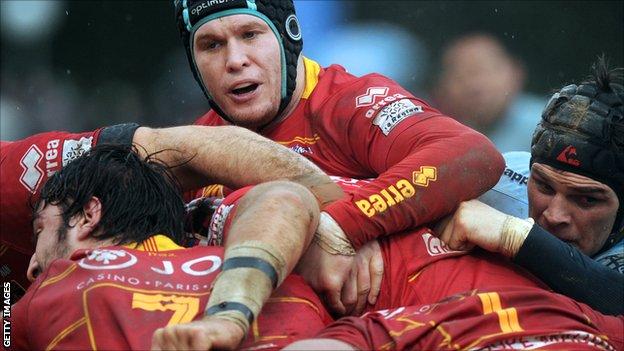 London Irish have signed forward Luke Narraway from Top 14 side Perpignan on a two-year contract.

The number eight, who has been capped seven times by England, has spent the last two seasons with the French side.

Narraway, 30, previously made 163 appearances for Gloucester, winning the European Challenge Cup and LV= Cup, and won his last international cap in 2009.

"Luke is a talented player with a huge amount of Premiership experience," said Exiles director of rugby Brian Smith.

Worcester-born Narraway has represented England at every level from the under-18s to the senior Test team, and was a member of the England Under-21 side that won a first Six Nations Grand Slam in 2004.

Smith added: "As a club, we want to be challenging for silverware and we need the right type of player to achieve those goals.

"I had the pleasure of working with Luke in the England set-up and look forward to doing so again next season. He has bought into what we want to accomplish and therefore is a perfect fit for London Irish."

Narraway said he was excited by the challenge awaiting him at the Exiles.

"There has been a lot of positive news to come out of London Irish over the last six months, not least with the announcement of the new board of directors and the move to a new state-of-the-art training ground," he said.

"I'm excited with the direction the club are heading and I'm looking forward to being a part of their plans."