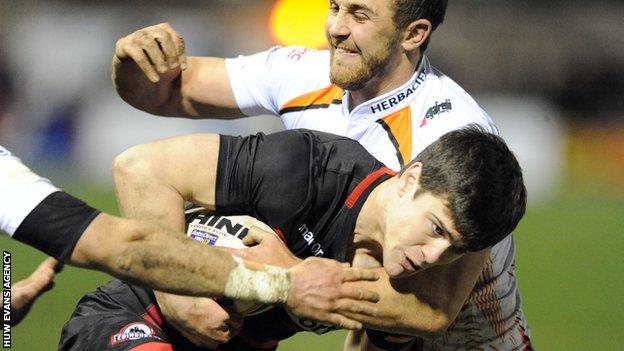 Edinburgh put a dent in Ospreys' Pro12 play-off hopes with a 31-25 win at at Boroughmuir RFC's Meggetland on Friday.

Jeff Hassler gave the Welsh an early lead with the first of his two tries, but Edinburgh responded as Grayson Hart, twice, and Sam Beard crossed.

The result was sweet revenge for eighth-placed Edinburgh, who had been thrashed 44-10 by Ospreys in September.

Ospreys remain in fourth place, but Glasgow are only four points behind them and have three games in hand.

The Welsh side had started brightly and flanker Justin Tipuric's pass out the back of his hand allowed winger Hassler to score, although Biggar could not convert from far out.

Edinburgh hit back when a long line-out drive finished with scrum-half Hart taking the ball and touching down behind the posts for Bezuidenhout to convert, with the full-back adding a penalty soon after.

Edinburgh resisted a sustained period of Ospreys pressure before extending their lead when winger Jack Cuthbert burst through to send in centre Beard.

Despite having prop Geoff Cross in the sin-bin, a third Edinburgh try followed as Hart was put in by flanker Roddy Grant.

Biggar had added two penalties to give Ospreys some reward for their possession but they trailed 22-11 at the break.

The Wales fly-half was twice on target again after the restart, although Bezuidenhout replied with a penalty of his own for Edinburgh.

Ospreys immediately responded with Hassler just getting a hand first to replacement Davies' clever grubber for an unconverted try, although Edinburgh's lead was now down to just 25-22.

The visitors lost Beck to the sin-bin and with Bezuidenhout kicking two more penalties it seemed as though Ospreys would leave Scotland empty-handed.

But with a minute remaining Biggar kicked his fifth penalty to secure a losing bonus point for Ospreys.