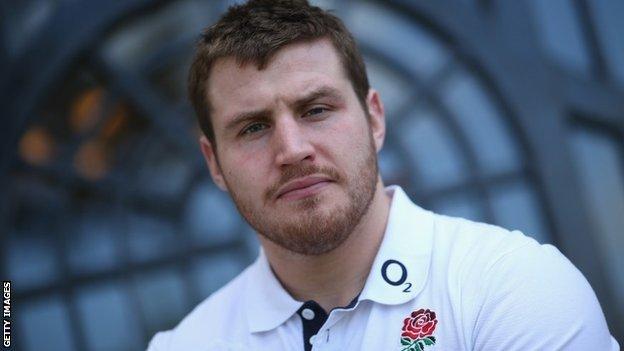 Vunipola is out until April because of an ankle injury, meaning Morgan will start against Wales on 9 March.

The 25-year-old Gloucester forward has won 18 international caps, the past six of which have been as a replacement.

"It's a great opportunity for Ben Morgan to cement his place back as the starting number eight," Lancaster said.

"The stage is set for him to prove himself as an international player again."

Morgan made his England debut against Scotland in February 2012, with his first start coming later that month in the 19-12 defeat by Wales at Twickenham.

The fixture next month, which will see England claim the Triple Crown for the first time since 2003 if they win, carries a special resonance for Morgan, who at one stage considered representing Wales.

But the former Scarlets player has no doubt he made the right choice.

"I am English," he told BBC Sport. "My heart has always been with England, and I'm proud to be playing for my country."

Morgan played regional rugby in Wales for three years and turned down an approach to represent the England Saxons in 2011, at the time reluctant to commit to the Red Rose.

"I think during that period a lot of people were telling me what I should and shouldn't do and that clouded me a bit," he said.

"I'm grateful for the Scarlets giving me an opportunity, and I wouldn't be here today without them. But I grew up dreaming of playing for England, and when it came down to that it was an easy decision."

Morgan acknowledges luck has played its part in his transformation from plumbing apprentice in the West Country to international rugby player.

"I actually got made redundant at about the time the Scarlets picked me up, so it all slotted into place," he said. "I've been very fortunate.

"I've always wanted to be a professional rugby player, and that's always been my ambition. You see a lot of people going into academies at the age of 14 or 15, and I missed that. It took me until I was 18 or 19 to make a breakthrough."

And Morgan thinks his convoluted route to the top has made him appreciate what he has achieved.

"I know what it's like to get up at half-four in the morning and work on a building site," he said. "I just love playing rugby, and to be able to do it for a living is fantastic."

Morgan missed most of last year's Six Nations with an ankle injury he sustained in the opening game against Scotland and, although he toured Argentina with England in the summer, patchy early-season club form meant he lost his starting spot to Vunipola.

But the Saracens forward's own ankle problem has given Morgan another chance, which he is determined to take.

"You never want to sit on the bench, that's not why you play rugby," he said. "I can't wait to get the shirt on and get stuck into Wales."