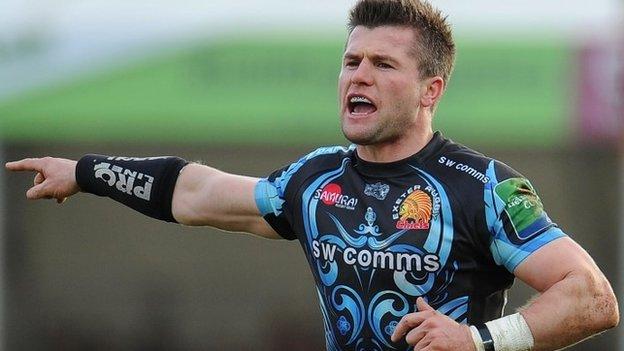 Veteran fly-half Ceri Sweeney has signed a new one-year deal at Exeter Chiefs, despite struggling for game-time since arriving from Cardiff Blues.

The 34-year-old is battling with Gareth Steenson and Henry Slade for the number 10 shirt, with most of his first-team appearances coming in the LV= Cup.

Realistically, I am that little bit older and I know where I am within the squad

"He realises what's important is to help the team develop and move forward as well as wanting to play every week."

But the emergence of 20-year-old Henry Slade as a genuine first-team contender has restricted his opportunities to make his mark at Sandy Park.

"But Ceri is filling a very interesting role for us in a lot of ways.

"He's a guy who can run a Heineken Cup campaign for you, because he's done that before [with the Blues] and he's very competitive.

"He's very good around the place and very popular within the squad, trains very hard and he's probably one of those guys who's been a bit unfortunate in terms of the amount of game-time he's had.

"But he's in a very competitive position.

"Gareth Steenson has done a hell of a lot of very good stuff for us during his time here and Henry Slade is a World Cup-winning Under-20s fly-half who's also starting to make his way in the Premiership and Heineken Cup."

Sweeney will also help coach and mentor some of the club's younger players as part of his role at the club.

"Luckily, I've got a lot of experiences and I've been in that situation myself in the past.

"I've not had too many opportunities to play, but it's a good environment and I'm delighted to have been asked to stay on.

"Realistically, I am that little bit older and I know where I am within the squad, but I'm still pushing hard and I want to be playing like everyone else."