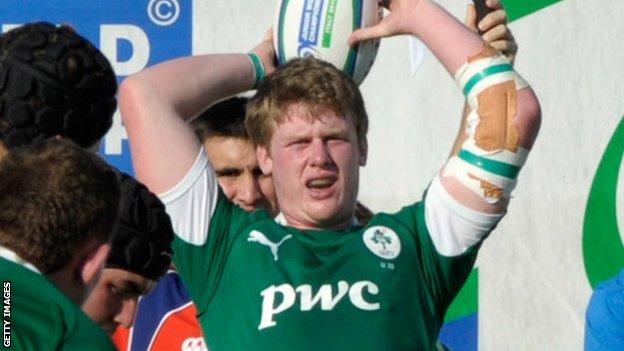 Relegation-threatened Worcester Warriors have made three more signings to bolster their squad for next season.

Given their precarious position in the Premiership, 12 points shy of safety with seven games left, Championship rugby in 2014-15 looks likely.

But boss Dean Ryan has still managed to attract 12 new signings to Sixways.

At a time when Worcester have gone a whole year without a win in the Premiership, the signing of former Ireland Under-20 international Annett is a further illustration of the young, hungry 'culture' that Ryan is attempting to build at Sixways.

"I am delighted that one of the best young forwards in Ireland has decided to join us, alongside two of the brightest talents in the Championship," said the Warriors director of rugby.

"Niall has developed well at one of the strongest teams in the PRO 12, while Dan and Ben have been key performers for a club battling to win the Championship title."

Giant 6ft 8ins lock forward Sanderson, 29, returns to the Midlands, having been with Moseley before moving in 2012 to join Rotherham, where he has made 45 appearances.

A year without a league win

Sowrey, 22, who also plays at hooker, has made 18 appearances for the Titans since joining Rotherham from Doncaster Knights at the start of this season.

They will link up with a third Rotherham player scrum-half Charlie Mulchrone, who has already signed to play for Worcester next season.

If the Warriors do end up getting relegated, Sanderson, Sowrey and Mulchrone are aware that they could end up swapping places with their former Rotherham team-mates.

The Titans, currently third in the Championship, are in a position to win promotion - and have had talks with Mansfield Town over a potential groundshare to comply with the Premiership criteria that all grounds must have a minimum 10,000 capacity.