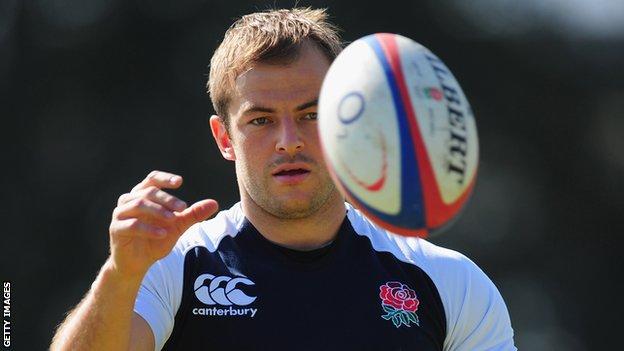 Northampton Saints fly-half Stephen Myler has said his experience with the England Six Nations squad has left him wanting more.

The 29-year-old was in Stuart Lancaster's pre-tournament party but was released ahead of the opening game.

"It enables you to look at different point of views and think how you can tweak things," the once-capped Myler told BBC Radio Northampton.

"I'd just like another opportunity to get my teeth into it."

Myler made a successful switch from rugby league to union eight years ago and has become renowned for his accuracy with the boot, kicking 969 Premiership points.

He has made the Saints number 10 shirt his own, playing every league game this season, but has never been able to establish himself on the international scene.

The former Super League stand-off made his only England union appearance as a replacement against Argentina in June 2013 and Owen Farrell and George Ford have been preferred at fly-half for the Six Nations.

"It was nice to get into the camp and be training down there and looking at the ideas which they're trying to implement," said Myler.

"It's good to get out of the environment you're familiar with and see things from a different perspective."