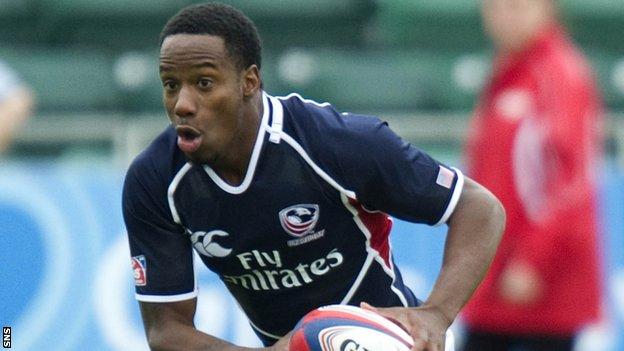 Glasgow Warriors have signed US Sevens player Carlin Isles until May 2015, subject to him passing a medical and obtaining a work visa.

Isles, 24, has been described as the fastest rugby player in the world after changing sports from athletics in 2012.

Formerly a sprinter, his 100m best of 10.13 seconds would have been enough for him to qualify for the semi-finals at the London Olympics two years ago.

He has scored 27 tries in 14 sevens tournaments for the US national team.

Born in Ohio, Isles began his rugby career at Gentlemen of Aspen RFC in Colorado and played for the US national development team at the Victoria Sevens in July 2012.

It's very exciting to be moving to the 15-a-side game. It's a lot different to sevens but I want to work hard and do everything I can to succeed

He has been a regular for the US Sevens team, playing at the Rugby World Cup Sevens in Russia last year and the Glasgow Sevens at Scotstoun in May last year.

Isles is due to arrive into Glasgow within the next few weeks to join up with Gregor Townsend's squad.

"I can't wait to fly over to Glasgow and join up with my new team-mates," he told the club's website.

"Everything has happened so quickly for me over the last couple of years and I'm just happy to be playing rugby and getting the opportunity to play at the highest level.

"It's very exciting to be moving to the 15-a-side game. It's a lot different to sevens but I want to work hard and do everything I can to succeed."

Warriors head coach Townsend said: "Carlin is an exceptionally gifted athlete, who has picked up the game of rugby in a very short period of time and has had a huge impact on the sevens circuit over the last couple of years.

"With his lightning pace and evasion skills, he already has an excellent base to challenge for a starting place until the end of the season."