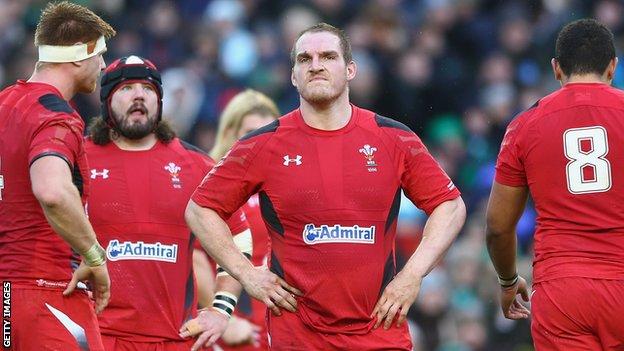 Wales prop Gethin Jenkins says they will not be distracted by the points difference in the Six Nations table when they face England on 9 March.

Both Wales and England put themselves back into title contention in the last round, Wales while England edged Ireland 13-10.

All four sides have four match points, but the Irish top the table with a points difference 36 better than Wales.

"This week is all about the win," said Cardiff Blues tight-head Jenkins.

"You can't go into a game thinking about points difference.

"Even last year when we beat England at the Millennium Stadium the points difference wasn't on our mind, it was just winning the game and obviously that happened.

"But if you go into any game thinking that then you're going to come unstuck."

England - who have home advantage at Twickenham against Wales - have less of a points difference to make up on Ireland, trailing by 21, who face Italy at home in the next round but must finish their campaign away to France.

But first Wales must claim a win at Twickenham if they are to go into the final Saturday with the trophy still within their grasp.

British and Irish Lions loose-head Jenkins is relishing the battle between the two scrums, which sees England deprived of tight-head Dan Cole through injury.

The Leicester player has missed only one of England's last 45 Tests and was part of the winning Lions squad in Australia last summer, coming off the bench in all three Tests.

His replacement, David Wilson, had started only one previous Six Nations game - against Wales four years ago - but Jenkins is not underestimating the Bath prop.

"He's [Cole] been a big player for them, he's coming towards 50 caps but Wilson is very experienced, he's been around the block quite a few times, he's doing very well at Bath," Jenkins said.

"They've got some good scrummagers in England and some good front-five forwards coming through as well.

"Usually there's not much of a margin between us. They're quite a young, fit team - similar to us really.

"So it's going to be a very physical game and we really have to be up to speed to make sure we can try and get that victory."