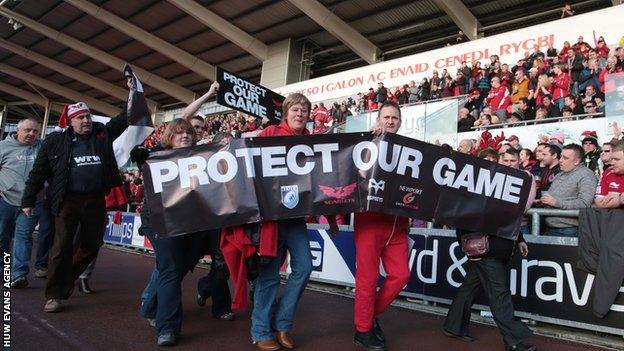 Regional Rugby Wales has published a letter that highlights concerns over a lack of trust with the Welsh Rugby Union and how the game is governed.

The letter also raises RRW's questions over how finances are distributed.

"For any long-term partnership to succeed, the requirement for trust is paramount," read the letter.

"The lack of trust between the WRU... and the regional organisations is at the core of the current dispute about the Participation Agreement."

The letter is a reply to questions raised by the National Assembly for Wales' Chair of the Communities, Christine Chapman AM, on the dispute between the WRU and its regional teams.

The members of the board should be chosen on the basis of their competence, ability, quality, leadership, integrity and experience... the WRU board does not comply with these basic principles

The WRU has been asked for its response to the subjects raised in the RRW letter.

The two sides had seemed to be heading towards a more cordial relationship in recent weeks after the two sides had been at odds over the signing of a new participation agreement,central contracting of Wales internationals and what competitions the regions will be playing in next season.

The Welsh regions refused to renew the existing agreement with the WRU by the governing body's 31 December deadline.

A new proposal from the WRU, called the Rugby Services Agreement, has now been presented to the regions who are considering it.

Although Cardiff Blues, Newport Gwent Dragons, Ospreys and Scarlets - which are represented by Regional Rugby Wales - failed to meet the new year deadline imposed by the WRU, the current five-year participation agreement does not expire until June 2014.

The letter to the National Assembly for Wales addresses the current conundrum faced by the regions, saying the four teams cannot enter into any new agreement with the WRU because of the uncertainty over the future of the Pro12 and the Heineken Cup.

"As at the 31st December, the WRU could not fulfil its responsibility of committing to either competition structure or revenues for the [20]14/15 season and the remaining term of the existing Participation Agreement," it read.

"In demanding the regions sign an extension, with an insistence that no renegotiation of any element was possible, the WRU was expecting the regions to legally commit to their operating costs without any commitment from the WRU to the competition incomes that are their responsibility under the agreement.

"Such a commitment by the boards of the regions would be at best irresponsible and possibly illegal in their duty to their shareholders, employees and creditors.

"It appears to the regions that the WRU seeks to control all the key activities of the regions, such as TV contracts, leagues, match timings and even, under the latest proposals, appointments of coaching and ancillary staff, without being prepared to share any level of commercial risk.

"The implication of such an intransigent stance is to further risk tens of millions of pounds of sponsor and benefactor support to the professional game in Wales.

"The WRU does not and could not run its businesses in such circumstances and nether can the regions."

As well as addressing further the regions' concerns over funding, the 4000-word document questioned the way the WRU governs the game in Wales.

"The WRU board does not comply with these basic principles.

"Consequently the regions do not believe that the WRU operates with adequate governance.

"It provides neither the transparency of decision-making expected by a governing body in the 'ownership' of member clubs, or the scrutiny expected of an independent organization answerable to shareholders.

"The result is a lack of 'check and balance' on the decisions of the executive, particularly in relation to financial performance, decisions and investment criteria."

The letter was co-signed by the chairmen and chief executives from all four regional rugby teams.