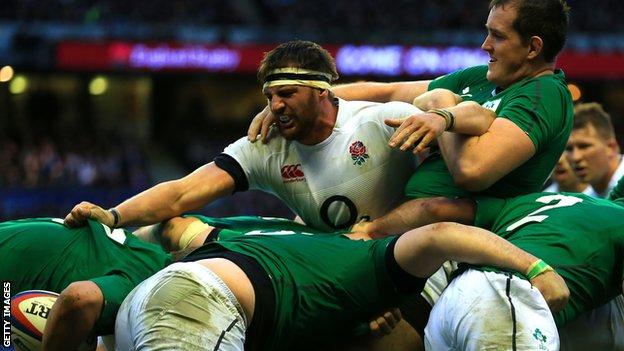 England must use their desire for revenge "in the right way" when they face Wales in the Six Nations next Sunday, according to flanker Tom Wood.

Both teams are in title contention ahead of Sunday's match at Twickenham.

"It's not just about going out with clenched fists thinking you're going to somehow enact revenge," said Wood.

The Northampton forward added on BBC Radio 5 live: "It's about having a determination not to let that happen again filter through in everything you do and in all your preparation from now until the game.

"There's going to be a lot of talk of revenge but we've got to be careful to use that in the right way. If you get caught up in the hurt of last time you can unravel yourself."

Both teams have won two and lost one of their three matches in this year's competition, as have Ireland and France.

While England followed a defeat by France on the opening weekend with victories against Scotland and Ireland, Wales' wins against Italy and France sandwiched a disappointing loss in Ireland.

And Wood is confident England can overcome the painful memory of last year's defeat in Cardiff to keep their title hopes alive ahead of the final round of fixtures on 15 March.

"I'd be lying if I said we didn't still carry an awful lot of hurt because it was a tough one to take," said the 27-year-old.

"We ended up with a pretty embarrassing scoreline, but I don't think it reflected how well we played. This is a chance for us to right what we felt was a wrong on that day."