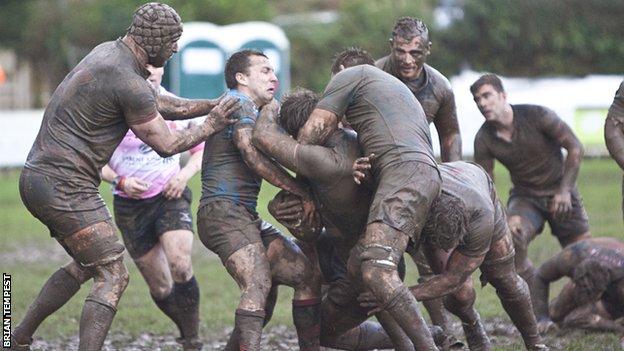 Cornish Pirates director of rugby Ian Davies says his side are better than their recent record might suggest.

The 19-15 victory over strugglers Jersey on Sunday was the Pirates' first league win since Boxing Day, leaving them in sixth place in the table.

"I think people have over-exaggerated where we are a little bit," he told BBC Radio Cornwall.

"We played poorly [to draw] against Ealing but we are where we are; we're a mid-table team and we're evolving."

There was a lot of emotion and endeavour

The Pirates enjoyed a strong start to the season but have tailed off in recent weeks, with injuries taking their toll on an inexperienced squad.

"The three defeats at Rotherham, London Scottish and Ulster away - they're tough places to go but this win gives us confidence," added Davies.

Davies gave a first Championship start to young full-back Max Bodilly, with the young Cornishman - on loan from the Exeter Chiefs academy - making a real impression in the presence of England star Jack Nowell, who followed a similar route to the top.

"Conditions weren't great and we knew Jersey had a good kicking game with Aaron Penberthy and Niall O'Connor, but Max seemed to cope with everything, controlled the back three really well and looked like a Championship veteran.

"There was a lot of emotion and endeavour. I'm disappointed we didn't get the four-try bonus point, to be honest. I thought we'd done enough to deserve that.

"Jersey were very good with ball in hand but we scored a cracking try and with the second one, we exploited the analysis we've done on how Jersey defend.

"It was superbly finished by Kyle Moyle and Max scored a great try on his debut, finding the only bit of dry ground on the pitch!"