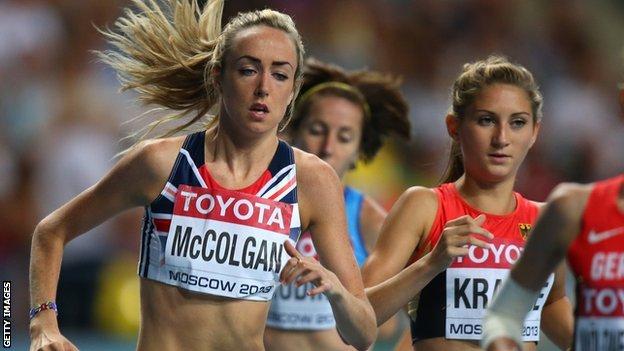 Eilish McColgan has withdrawn from the Great Britain & Northern Ireland team for the IAAF World Indoor Championships in Poland through illness.

Fellow Scot Eilidh Child has been named as captain of the team for the event in Sopot from 7-9 March.

But McColgan, who was selected to compete in the 3,000m, has not returned to full fitness following her "recent minor illness".

"It's really disappointing that I'm not going to compete," she said.

"I was really looking forward to it, but I don't feel I would do my selection justice at this moment in time.

"I wish my team-mates the very best of luck in Sopot.

"I'm excited for the summer season and aiming for a successful Commonwealth Games and European Championships."

United States-based Kate Avery, who is the highest-ranked British 3,000m runner this year, claimed last month that she had not been selected for the championships in Poland because she did not ask for permission to miss the trials in Sheffield.

McColgan, who has not raced since 22 September, also missed the trials.

She said: "I was really shocked when Neil phoned me. It was the last thing on my mind that I was going to be asked to be team captain.

"I'm really honoured, it was a complete surprise.

"To me, the role of captain is about being there to support one another. Hopefully, I can add that extra little bit of support and try to keep everyone chilled out and relaxed."

Black was delighted that Child had accepted the role.

"At the recent Sainsbury's Glasgow International Match, Eilidh demonstrated her leadership skills when she captained the Scottish team," he pointed out.

"She is well respected amongst her fellow team-mates and I know she will lead by example.

"We've got a relatively young team in Sopot and experienced athletes like Eilidh will help integrate the number of new faces in the team."