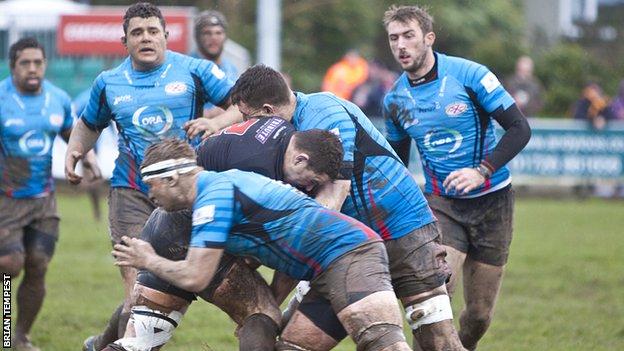 Jersey head coach Harvey Biljon believes his side have "turned the corner" despite a 19-15 defeat at the hands of Cornish Pirates on Sunday.

Biljon's side are next to bottom of the table, but the South African says he can see reasons for optimism.

"We've turned the corner. Not getting a win doesn't alter the momentum we are creating," he told BBC Jersey.

"We're building slowly and the group is coming together. It's definitely in a much better place than when I arrived."

Jersey are seven points clear of bottom side Ealing Trailfinders, who they still have to face this season, and Biljon said the losing bonus point against the Pirates was still a valuable step in the right direction.

"The first thing I said after the match was that I was really proud of the players," he said.

"We have set our own goals and targets within the group and we achieved one of those. The Pirates is a very difficult place to come and win or even get a point and the fact that in very terrible conditions we achieved what we set out to achieve.

"A point is obviously very important to us but I'm more impressed by the performance and the way the guys showed their character."