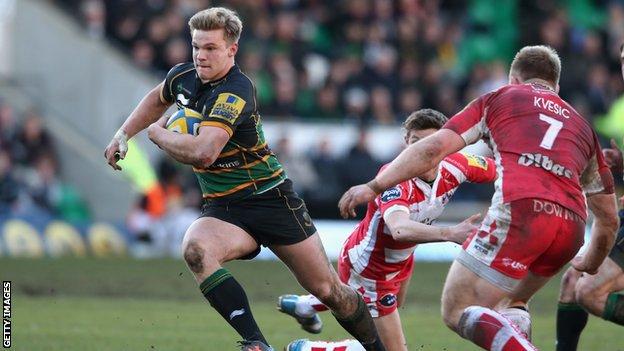 "He is a huge prospect. Stevo is a very confident character - that comes across in the way he plays," forward Dowson told BBC Radio Northampton.

"He's a very young lad but he's playing against one of the most experienced England centres [Mike Tindall] and he took it to them."

Stephenson, an academy product at Franklin's Gardens, had only made one first-team appearance before this season.

But he has played seven times this term and now has tries in each of his last two games.

The England Under-20 international picked up the ball from outside the Gloucester 22-metre line and showed quick feet to burst through and touchdown at the weekend.

"I think Alex King [backs coach] challenged the backs that if they scored from first phase he'd take them out for dinner," said Saints boss Jim Mallinder, whose side went back to the top of the Premiership.

"But Tom has scored for the England Under-20s and has done the same for us.

"I thought he was very good in defence, picking up some loose balls and in attack he's got that ability to stay on his feet."