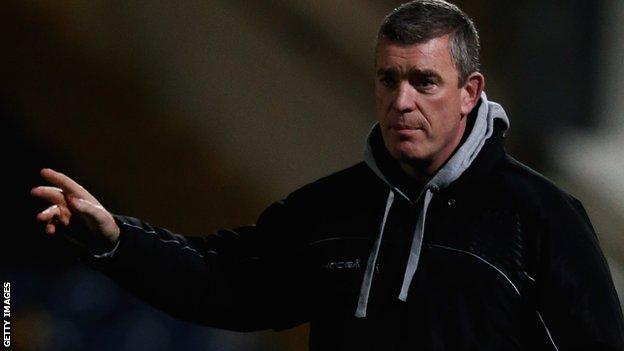 Worcester Warriors boss Dean Ryan still believes they can avoid relegation from the Premiership, insisting that his team will be "fighting like mad" to stay up during the final six matches.

Despite now having gone a whole year without a league win, their five bonus points from this season's 16 straight defeats leaves them only 11 adrift.

Can Warriors beat the drop?

"Worcester are fortunate that Newcastle are also struggling. In another season, they would have been all but relegated now.

"They have to win at least three games, including the one at Newcastle, and hope the Falcons do not have an end-of-season resurgence.

"They could, maybe should, have beaten Leicester at home and Quins away. The problem goes back to early in the season when they failed to win home games against Newcastle and London Irish.

"There are, it seems, two Worcesters. The one that goes out and fights like anything against the better sides, and the one that turns in abject home displays against Sale and Exeter [in the LV= Cup].

"It took a long time for Dean Ryan to work out his best side - and the problems at fly-half have been a major issue. Also, the forwards are not of the old Warriors vintage, when they may have been somewhat short of attacking options, but could be guaranteed to grind out the odd win.

"Ryan's long-term plan is to be applauded, but how many fans will turn up if they do go down? There may need to be some very clever marketing if Sixways is to be even half full."

But much will hinge on their trip to 11th-placed Newcastle on 30 March.

"But we need to get something in our back pocket before we go to the north east.

"We've got our next game at Sixways. Let's see what we can do."

Worcester need at least three wins from their last six matches to stay up. And the fact that their next opponents at Sixways on 21 March are Wasps further adds to the equation for those positive-minded believers who think Worcester really do have a chance of survival.

After all, it was at Sixways, against Wasps, on 1 March last year, that Worcester last recorded a Premiership victory, winning 29-23.

Since then, Warriors have lost 21 league matches in a row - and they are now in obvious danger of emulating Rotherham Titans' unwanted record of going a whole Premiership season without a win in 2003-04.

The statistics do not look good for Ryan's reshaped outfit.

Of the six matches they have left, three are away. The first is that crunch clash at Newcastle and the latter two are at third-placed Bath and second-placed Saracens, who are both chasing places in the play-offs.

More to the point, while it is a year since Worcester last won at home in the Premiership, their record on the road is even worse. Their last away win, also against Wasps, was on New Year's Day 2012.

On top of that, Worcester have scored just 16 tries in their 16 Premiership matches this season.

Winger David Lemi is top scorer with four while, with only two tries each, Ignacio Mieres, Josh Drauiniu and Mario Galarza all share the dubious honour of being joint-second top scorer - along with that faithful old campaigner, Penalty Try.

The most tries they have scored in any game is two, so the idea of turning four-point wins into bonus-point victories looks a tall order. That leaves them with a realistic maximum of 24, rather than 30 points to play for.

And, once they return to action on 21 March, the Six Nations Championship will be over, by which time Worcester will have lost their advantage of playing against the top teams when weakened by international calls - as was the case when Ryan's men came so close to beating not only Quins but also Leicester last month.

A load of bull?

One key character in the Warriors' bid to stay in the Premiership may be a local bull, called Earl.

In a throwback to the predicting skills of that infamous World Cup octopus, Paul, a BBC Hereford & Worcester listener, from Suckley, claims that when his bull won't eat, it's a good omen for the Warriors.

"There's been only one point in it against some of the top sides," Ryan explained to BBC Hereford & Worcester. "But that's something we've got to shake off if we're to be anywhere successful in the challenge of avoiding relegation.

"We're short on ability compared with the Leicesters, Northamptons and Harlequins. That's fact.

"But I was really proud of the guys against Quins. There certainly isn't any lack of work-rate from this group.

"We had an opportunity to get something against Sale and didn't take it.

"We're a small group. And we know, if they don't work to their maximum they just fall off the cliff."

As to the plus points, with the support of the Sixways crowd likely to play a key role, that could all boil down to the importance of improving their form on home soil.

The three games they have left at home are all potentially winnable, against the sides currently in seventh, eighth and ninth - Wasps, Exeter, the club against whom Warriors have always measured their Premiership progress, and Ryan's old club Gloucester on the final day of the league season on 10 May.

However, if they get no change out of Wasps on 21 March, and then more importantly at Kingston Park the following weekend, they could find themselves relegated by Easter.

But, where there is life, there is hope. And, as ridiculous as it might look at first glance after such a miserable season, they can still survive.

"It was heartbreaking to come so close against Quins," admitted prop forward Ofa Fainga'anuku. "But our character's starting to show - and I think there's more to come.

"Dean Ryan's drilling it into us. We've got to fight now for the last six games. There has to be belief."