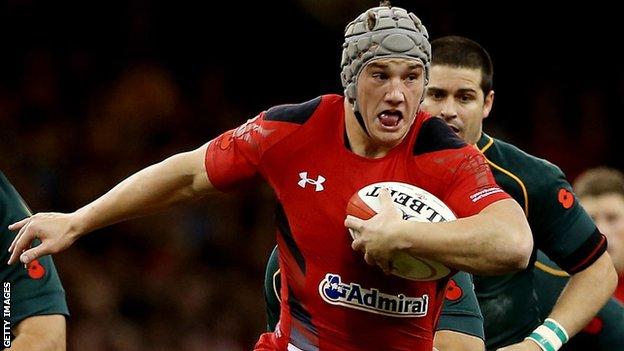 Jonathan Davies is back in the Wales side for the first time since November to face England in the Six Nations at Twickenham on Sunday.

The Scarlets centre has played only two halves of rugby since suffering a chest injury against South Africa.

Davies, 25, is one of two changes from the side which beat France 27-6, with lock Alun Wyn Jones, 28, back after recovering from a foot infection.

Rhys Webb remains at scrum-half ahead of Mike Phillips, who is on the bench.

There is one positional change in the backline. With Davies returning to partner Jamie Roberts at centre, George North reverts to the wing with versatile Scarlet Liam Williams back on the bench.

Also a replacement is Scarlets lock Jake Ball, who was impressive on his first Wales start against France when Jones was a late withdrawal.

Gatland says he is under no illusions of the challenge facing the defending champions at Twickenham.

"I think they're improving," said Gatland.

"I look at their side at the moment and they're missing some key players - Dan Cole, Alex Corbisiero, Geoff Parling, Manu Tuilagi if he doesn't start.

"If you look at the two sides, there's a massive amount more experience in our side compared to England's.

"They're a team on the up and they're improving as well. I think they're missing a number of important players who, if they come back in the next 12 months, will make them stronger given the younger players they've got at the moment will gain some experience."

But the New Zealander also welcomed the return of two experienced players in centre Davies and lock Jones to face England.

"It's great to have both Jon and Alun Wyn back and available, and they come into a very experienced side," said Gatland.

"He [Jon] has had a couple of games and had 60 minutes at the weekend for Scarlets. He trained well yesterday [Tuesday].

"He's a world class player so it wasn't difficult for us to make that call.

"He's ready to go. In terms of being fit he is really, really sharp at the moment. He just hasn't had a lot of rugby."

Gatland insisted that Rhys Webb deserved to keep the number nine jersey after his performance against France.

"I don't think it would be fair to drop Rhys after the way he played against France and that performance," the coach added.

"We are really looking forward to going up to Twickenham - England have performed well so far and it's set up to be a great game with all to play for."

The back row remains unchanged with captain Sam Warburton featuring alongside Dan Lydiate and Taulupe Faletau.

Ken Owens, Rhodri Jones and Paul James are named as the front-row replacements and are joined on the bench by Ball and Ospreys flanker Justin Tipuric.

Phillips, Dan Biggar and Liam Williams provide the cover for the backs.