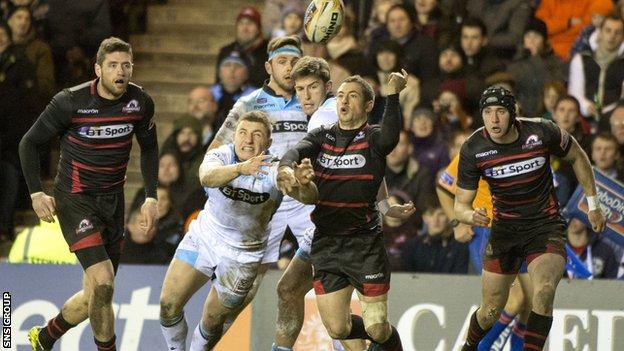 Glasgow Warriors will host Pro12 rivals Edinburgh in the decisive leg of the 1872 Cup in late April.

The New Year's Day league match was postponed because of a waterlogged pitch at Scotstoun Stadium.

The game will now be played on the weekend of 25-27 April, when the Heineken Cup and Amlin Challenge Cup semi-finals are to be staged.

Glasgow won the Boxing Day fixture 20-16 at Murrayfield, with the trophy given to the aggregate winners.

European Rugby Club Ltd must approve the date and kick-off time of the rescheduled tie.

They will do that once they know which teams will be involved in the last four of the European Cup competitions, with BBC Alba to provide live television coverage.

Glasgow, who have dominated the derby in recent seasons, plan to increase the capacity of Scotstoun for the clash.

The Warriors have also rearranged their previously postponed home game with Treviso for 4 April.