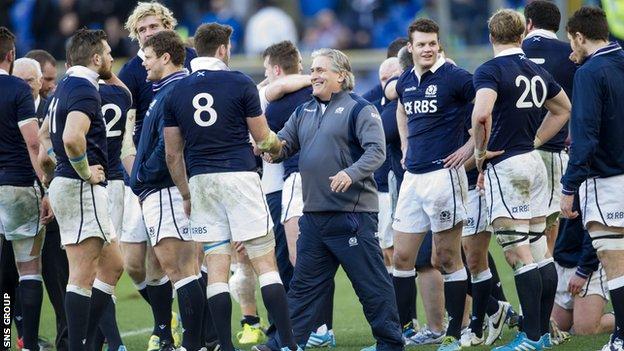 There was a story once about a guy who set himself a challenge of reading the most head-wreckingly complex novels ever written, one a week for 52 weeks.

He began with some James Joyce, then kicked on with a bit of Kafka, some Tolstoy and a couple of doses of Dostoyevsky.

A month ago, Johnson cut Brown loose and told him to work on things if he wanted to play for Scotland again. It was akin to a six-year-old telling his granny how to suck eggs

By the time he had conquered this literary Everest all of his friends called him The Boffinator. His head had swollen to the size of a large melon.

He read Proust to his children at night. He took Sartre with him to the toilet. He went on holiday and read the complete works of Vladimir Nabokov by the swimming pool every day while simultaneously listening to the audio version of One Hundred Years of Solitude by Gabriel Garcia Marquez.

But he never tried to get his over-sized brain around Scott Johnson's team selection.

That would have stumped him. No doubt about it. Reading Ulysses is a doddle. Reading Johnson far less so.

He throws his captain overboard after Ireland. He abandons his best line-out forward for England. He drops his biggest ball-carrier for Italy.

Kelly Brown, Richie Gray and Dave Denton all have cause to scratch their heads in wonderment at some of Johnson's thought processes. Brown most of all.

In the Johnson odd-o-meter there is only one thing more peculiar than Brown's sudden banishment to the wilderness for the games against England and Italy, and that is his surprise return for Saturday's match against France.

Let's get this straight. Johnson picked Brown as his captain throughout last year's Six Nations. He picked him as captain for the autumn internationals as well. To begin with, at least.

Brown played, as captain, against Japan and was then swiftly dropped from the 23 to play South Africa, only to return as captain the following week against Australia, only to be substituted before the hour-mark in Dublin and dropped entirely from the squads for England and Italy.

And now he's back - as captain. What has changed in few short weeks? A month ago, Johnson cut Brown loose from the squad and told him he needed to work on things in his game if he wanted to play for Scotland again. It was akin to a six-year-old telling his granny how to suck eggs.

Brown knows about playing seven for his club and his country and didn't need to be patronised by a coach who only landed in Scotland a veritable heartbeat ago.

Brown played poorly against Ireland. No question. After 61 caps you would have thought that he'd have been given a chance to redeem himself straight away, but no.

Dropped and then talked down to.

Open-side flanker is not Brown's best position, but he can do a job there. And has done. He has won some big Tests playing seven.

He routinely plays seven for his club at a considerably higher level than any of the other sevens at Johnson's disposal. Ross Rennie or John Barclay at their best could push him out of the seven jersey. He was the best option a month ago and he's still the best option now.

In the last number of weeks he has not suddenly learned new things about the art of an open-side. He's not been reinvented as a groundhog.

Of the three games he has played for Saracens in his spell away from the Scotland set-up he has spent half his playing time not at seven at all, but at six.

So what, exactly, is the rationale behind his return? Johnson says that you don't really need to play a truffle pig at seven against France. He also said that Brown's attritional style would suit the pitch, which is bound to cut up and could turn Saturday into war minus the shooting.

Some kind of act of contrition would have been appropriate. It would have been nice to hear him add that he'd maybe made a mistake not just by jettisoning Brown but also for the grubby way he did it. Maybe he'll get around to that if his captain has a stormer on Saturday. Maybe.

Brown has been badly messed about, but you'd hang your hat on him to deliver a big performance on Saturday. Not because he wants to prove a point to his coach but because delivering big performance is what he's all about.

Johnson says he wants consistency of performance from his players, which is not too much to ask. Neither is it unreasonable to expect him to make up his mind as to who is Scotland's captain.

If Johnson wants to inspire more leaders then it might be a good idea to stop undermining the ones he has. Brown's return is to be welcomed. But he should never have been away in the first place.