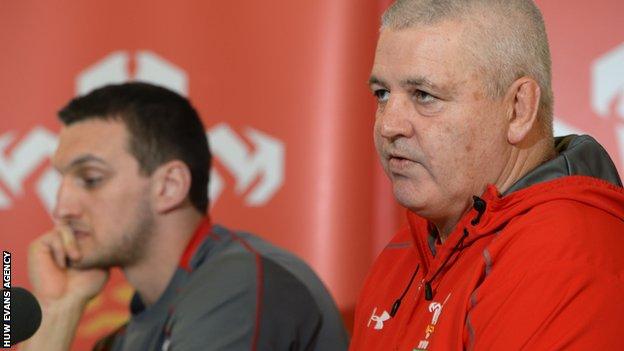 Coach Warren Gatland believes England are an improving side but will miss key players against his more experienced Wales team in the Six Nations.

Wales go to Twickenham at full strength on Sunday but England have injuries.

"If you look at the two sides there is a massive amount more experience in our side compared to England."

Wales have brought back British and Irish Lions duo - centre Jonathan Davies and lock Alun Wyn Jones - to boost their chances of repeating their 30-3 victory in Cardiff in 2013 which sealed the Championship title.

But Gatland is still expecting a tough game at Twickenham despite England being without four Lions in Corbisiero, Cole and Parling, as well as Tom Croft.

Both sides go into the match with similar records in this season's tournament - two wins and one defeat.

"There's obviously a big build-up between now and the World Cup in terms of making Twickenham a fortress. We know it's going to be a tough game," added Gatland.

"If they [the key players] do come back in the next 12 months, it will make them stronger given that the younger players they have got will gain some experience at the weekend.

"They are a good side at the moment. They are well coached and they look as if they are playing with a lot of confidence."

But Wales have an impressive recent record over England, having beaten them on the last three occasions without conceding a try.

"I only heard that stat earlier in the week which surprised me. It made me realise how our defensive structures have worked against them," said Warburton.