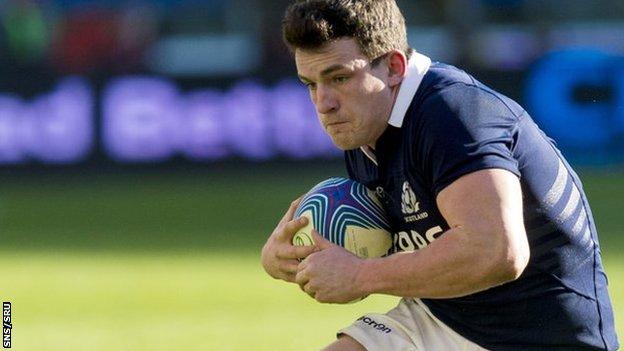 Edinburgh have extended the contract of Matt Scott, with head coach Alan Solomons hailing the Scotland centre as an "exceptional athlete".

"This is incredibly good news for us," said Solomons. "Matt is an outstanding young talent who has now established himself at international level.

"It's great to have a Scottish player of that calibre commit himself to the future of this club."

Dunfermline-born Scott, who previously played for Currie, joined Edinburgh's elite development programme in the summer of 2011.

"Matt is an exceptional athlete," said Edinburgh coach Solomons. "He is a physical and powerful player who runs good lines and presents a real threat to the opposition.

"The time is probably right for him to play a greater role in the broad leadership group within the club and I think he will have much to offer in that regard, particularly for young aspiring Scottish players."

The centre was delighted to follow suit and commit himself to Edinburgh "at a key time in my career".

"I've made life-long friends at the club over the past few years and it's good that we're keeping a good core of guys that know how much it means to play for Edinburgh," said Scott.

"That was key for me and I'm happy to be one of those guys and be part of building the club going forward."