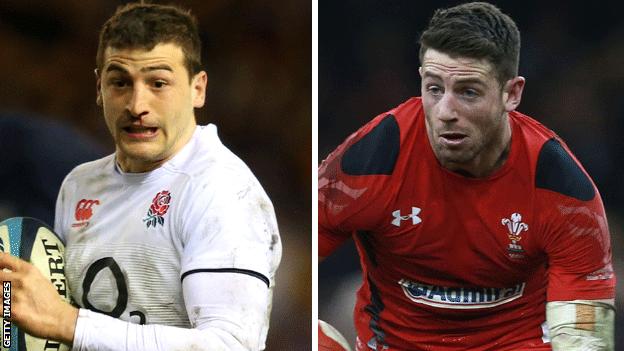 England winger Jonny May says it is no surprise he finds himself facing old college friend Alex Cuthbert in the crucial Six Nations meeting with Wales at Twickenham on Sunday.

The pair were team-mates at Hartpury College in Gloucestershire before turning professional.

"He's always been big, fast and strong, and has really developed as a player in the last few years," said May.

"He is a good guy, a world-class wing and I will have to be at my best."

While May is set to win only his fifth cap on Sunday, Cuthbert has made 22 appearances for his country and scored two tries in the 30-3 win over England that clinched the Six Nations at the Millennium Stadium last year.

May was yet to make his first international appearance at that point, but says the match serves as a warning of what to expect from Wales.

"I was at home watching and I was taken aback by the physicality of the game that the Welsh brought," added May.

"At the time we didn't have much of an answer to it, but there are a lot of new faces and I feel we have come a long way as a team. Hopefully we can give it a better shot this year."

With Cuthbert on the right wing for Wales and May on the left for England, the two will be in direct confrontation and the 23-year-old Gloucester man says he will leave catching up with his college friend until after the final whistle.

"He has moved away so we are not as close as we used to be, but we text a little bit," he said.

"We won't talk this week but it will be good to catch up with him after the game."

Cuthbert told BBC Sport: "There's a good mate of mine on the opposite wing, which is exciting, and I'm looking forward to playing him.

"We were at Hartpury together and in my second year he was just breaking into the Gloucester academy, and he's doing now what he was doing then, so I'm glad he's doing well and he's going to be a big threat on the weekend.

"I'm sure he'll have probably something to say on the pitch, but it will all just be a bit of banter, but it's exciting and I'm just looking forward to it."

England, Wales, Ireland and France are level on four points at the top of the Six Nations table with another two rounds of the tournament left to play.