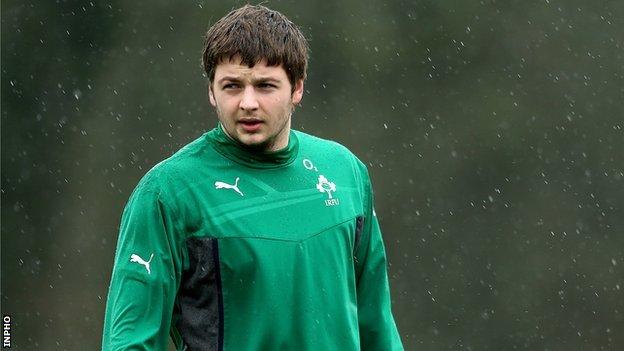 Ulster back-row forward Iain Henderson has been named in the Ireland team for Saturday's Six Nations game with Italy.

Henderson replaces Munster flanker Peter O'Mahony, who is still recovering from a hamstring injury sustained in the defeat by England at Twickenham.

The Racing Metro fly-half has proved his fitness in training this week.

Leinster's Rhys Ruddock occupies the place on the replacements' bench vacated by Henderson, with Eoin Reddan joining him among the substitutes after the decision was taken to rest Isaac Boss.

Henderson, 22, will win his ninth cap, although O'Mahony is likely to return to the side for the trip to Paris to face France after the benefit of another week's rest.

"We believe Iain is athletic enough to play at six and he has come on as a replacement in the Six Nations before, so he is not new to the tournament.

"He is a fantastic line-out option to have there and he might even finish the game in the second row, which would allow us to look at other options," said Schmidt.

As expected, Brian O'Driscoll has fully recovered from a calf injury in time to earn a world-record 140th cap at the Aviva Stadium.

Paddy Jackson again offers cover on the bench for Sexton.

"My hope and expectation is that Ireland win and they win well, so they have a buffer in points difference and can go to Paris knowing that a win will pretty much guarantee the title. I imagine if the rugby gods are smiling and Ireland are winning well that Joe Schmidt will take Brian O'Driscoll off with 10 minutes left so he gets to feel the spine-tingling ovation he will surely get."

Despite falling at the final hurdle in their bid to secure the Triple Crown, Ireland remain strong contenders for the championship as their points difference is presently superior to England, Wales and France, who have also won two of their three outings to date.

"The temptation was there to make other changes to the side and certainly some players have been putting their hands up for starting places," admitted Schmidt.

"We had to balance that with continuity and a respect for Italy. We can't get too far ahead of ourselves and must play to the best of our ability.

Ireland's final match will be against France on Saturday 15 March.