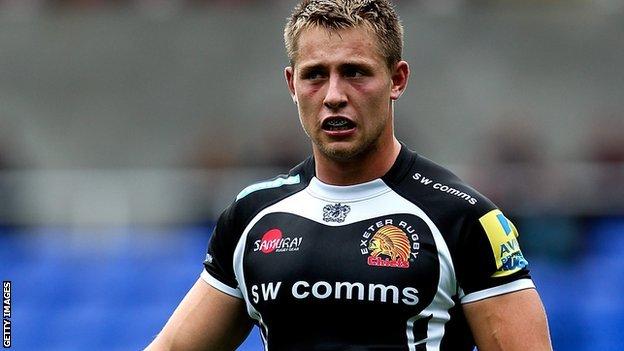 Exeter Chiefs centre Sam Hill has agreed a two-year contract extension with the Sandy Park side.

The 20-year-old academy graduate has made 10 Premiership appearances this term, starting eight, and also featured in the Heineken Cup.

Hill, whose new new deal will keep him at Exeter until the summer of 2017, also played for England Saxons against the Irish Wolfhounds in January.

Sam's had a fantastic season, and he's done it the right way

"It's one of the signings that makes me smile," Chiefs boss Rob Baxter said.

"I think he's a good example of a success story of our academy, and one we think will thrive for the next three years, and hopefully develop into a full international player, not just a Saxon."

Like Exeter's England wing Jack Nowell, who also came through the Chiefs academy, Hill spent time at Championship side Cornish Pirates on a dual registration deal in 2012.

Both Nowell and Hill helped England clinch last year's Junior World Championship in France, scoring a try each the 23-15 win against Wales in the final.

"He's moving out of the academy into the senior squad now and I think that's fantastic," Baxter told the club website.

"He's the first one of our England Under-20s guys to extend his contract, and we're hopeful the other guys will do likewise.

"Sam's had a fantastic season, and he's done it the right way. He's worked hard when he's gone to a Championship side and enjoyed working with the Pirates coaches and Pirates players."