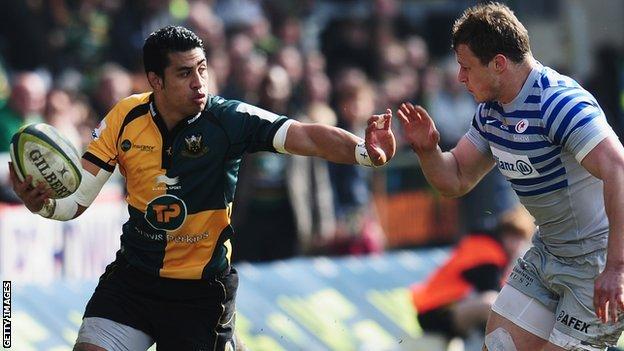 Will Hooley struck two penalties for Saints and, although Saracens dominated the rest of the first half, Ben Ransom's try was their only score.

The hosts responded after the break as Pisi charged over twice either side of a Stephen Myler drop goal.

Northampton, winners in 2010 and runners-up in 2012, can consider a league and cup double a possibility this season, after reaching the Sandy Park final to face either Bath or Exeter, who play on Sunday.

Saints in the Anglo-Welsh Cup

Northampton have now reached the final of the Anglo-Welsh Cup in three of the last five seasons.

Saints beat Gloucester 30-24 at Sixways to lift the trophy in 2010, before going down 26-14 to Leicester Tigers at the same venue two years later.

And this semi-final could very well be the shape of the Premiership final at Twickenham come the end of the season, with both sides streets ahead of the rest of the pack at the top of the league, and boasting England's highest points scorers and meanest defences between them.

But as tempting as it was to use this game as a measure of who may have the edge ahead of a title run-in, the reality is that the second-string nature of the line-ups made this more a test of depth of strength than championship suitability.

There were a total of 21 combined changes from both sides' previous Premiership fixtures - 14 from Sarries and seven from Saints - with Saracens boss Mark McCall eager to reward the players who had brought his side this far.

Jim Mallinder's Northampton, meanwhile, had a more experienced look about them, and shaded the opening period of the match, with Hooley putting over a pair of penalties after some sustained pressure.

But Saracens, driven on by the power of Jamie George, whose burgeoning reputation continues to grow, began to flex their muscles and missed chances to take a firm grip on the game.

After Michael Tagicakibau had come close to crossing, England full-back Ben Foden, making his first start since November following a knee injury, had to be sharp to hold up Jack Wilson.

Sarries eventually landed the first try of the day when Ransom finished well from Nils Mordt's short pass inside.

Ben Spencer kicked the extras and then put an achievable penalty wide, before Marcelo Bosh thought he had crossed, only for it to be ruled out for a forward pass by Mordt.

Saints, fortunate to be just a point behind at the break, turned to the boot of Stephen Myler for inspiration following his introduction from the bench for the injured Tom Stephenson.

And it was the fly-half's grubber kick that led to Saints' opening try, forcing Saracens to concede a line-out, which the home side turned into a thunderous maul, finished off by Pisi clattering over the line.

Hooley, now switched to centre, put the simple conversion wide, but Myler made amends for his fellow back by putting a drop goal through the posts.

And Saracens were left to rue their missed opportunities of the first half when Pisi added his second, applying the finish to a series of quick passes after Foden's kick had put Saints deep into visitor territory.

McCall's side were gifted a chance to claw their way back into it when Charlie Hodgson raced away after intercepting a Samu Manoa pass, only to be tackled by the brilliant Pisi.

And the Samoan summed up his terrific performance, as well as Saints' second-half ruthlessness, by collecting the ball five metres short of the line to once again burst through the Saracens rear guard.

"They got the better of us in the first half and we were probably fortunate to only concede one try.

"But we managed to keep them out and I think the impact we had from the substitutes bench was very telling as the match went on.

"We'll give the lads a couple of days off and then come back and take a proper look ahead of the final.

"I've got no preference out of Bath and Exeter, we know they are both good teams and fully expect a tough game."

"We have to look back at what might have been I suppose. We had three quite good opportunities and we converted one of them.

"Against a team like Northampton you have to take the chances when they come along.

"They were very clinical when they came up to our 22 and came away with something every time.

"But I'm really proud of how we did in the first 50 minutes of the game.

"The disallowed try was a game changer, it would have been 14-6 to us. There were some really good things and some good experience for our young players. It's an important part of their progression."