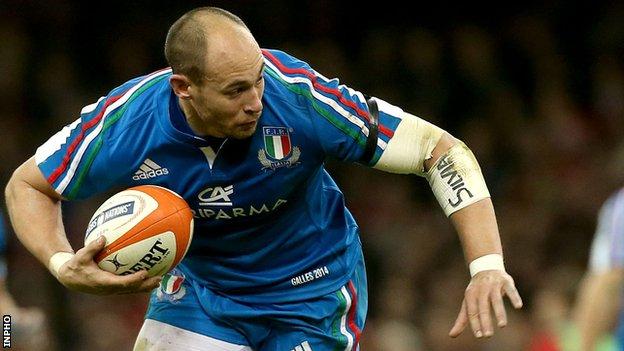 Robert Barbieri comes in for the number eight, who is being rested in the hope he will have recovered in time for the home fixture with England on 15 March.

Prop Martin Castrogiovanni, currently tied with Parisse as Italy's most capped player, will set a new record when he makes his 105th appearance.

Blind-side flanker Alessandro Zanni will also be missing from the Italian line-up.

"We've got five back row players out injured, so we have to adapt," said head coach Jacques Brunel on Thursday.

Bortolami, a former Italy captain, joins Paul Derbyshire and Luciano Orquera in being promoted to the starting XV, with all three having all been replacements against Scotland.

Tito Tebaldi returns to the Italy team for the first time since June 2012 and will start at scrum-half.

Prop Michele Rizzo is included among the replacements after serving a three-week suspension for head-butting an opponent.

The Italians go into the game seeking their first win in the competition after three defeats.

They have not beaten Ireland in Dublin since a 37-29 victory in January 1997.