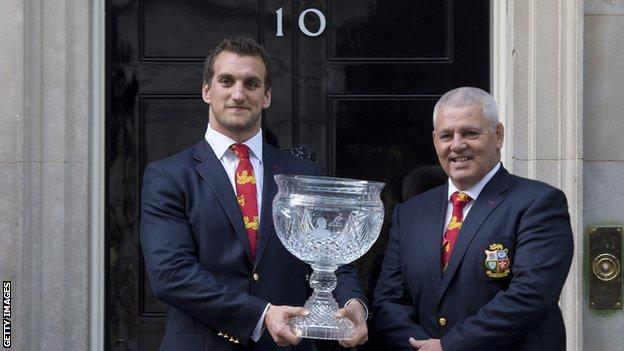 Warren Gatland says a 2014 British and Irish Lions team would have more English and Irish stars than the Wales-dominated 2013 side in Australia.

Wales have 14 Lions in Sunday's Six Nations squad against England, who are expected to have one - Owen Farrell.

"If you were picking a Lions team tomorrow it would be completely different to what we had 12 months ago," said Wales coach Gatland.

"And I think the balance would be fairly even between the three countries [Wales, Ireland and England].

"And that's the way that selections goes and changes."

The debate over that later prompted Gatland to suggest a debate on quotas for future Lions selections.

In the final test down under in July, Ireland had three starters in wing Tommy Bowe, fly-half Jonathan Sexton and flanker Sean O'Brien while England provided prop Alex Corbisiero and lock Geoff Parling.

Gatland says when Wales beat Grand Slam-chasing England 30-3 to take the 2013 Six Nations title, they were inspired by having begun the tournament poorly and a desire to impress for Lions selection and deny their opponents a day of glory in Cardiff.

However, the New Zealander says England's 2014 title-chasers may now be more "desperate" ahead of the clash at Twickenham.

"A lot of [Wales] players were probably aware that it was almost a trial game in terms of the Lions selection and to win at home against England, who had a chance of winning the championship," said Gatland.

"So almost psychologically probably some of the Welsh players had a little bit more to play for and a bit more desperation.

"And maybe the tide's turned a little bit in terms of the English players being potentially a little bit more desperate.

"And because a lot of those Welsh players have had a lot of rugby in the last 18 months - they've had some big games and big occasions in terms of a [2012] Grand Slam, a [2013] Six Nations and a Lions tour - it's almost as if they're in the middle of having to get themselves up mentally.

"And we saw they weren't quite right or weren't quite there for the Irish game [Wales lost 26-3] and I was really happy with the way they responded against France.

"But again it's another big game for them on Sunday that they need to get up for."