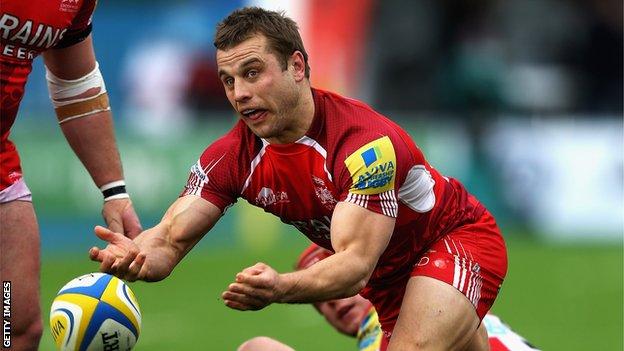 London Welsh have re-signed Tyson Keats, the player at the centre of last season's ineligibility controversy with the Rugby Football Union.

Welsh, then in the Premiership, were fined £15,000 and deducted five points for fielding Keats last season.

The New Zealand scrum-half joined the club in 2012, having previously played for Italian side Aironi.

The case surrounding 32-year-old Keats, who made 18 appearances for the club last season, was visa-related.

Former team manager Mike Scott had falsified a player registration form by stating that Keats was born in Christchurch in Dorset, instead of Christchurch in New Zealand, and it led to him receiving a life ban from the RFU.

The potential within this group of players is remarkable.

As well as Keats, the Exiles have signed seven other players to boost their hopes of an immediate return to the top flight.

Arriving on dual registrations are Worcester Warriors and England Under-19 wing Josh Watkins and Bath second row Will Spencer.

In addition, Wasps number eight Rory Pitman and Leicester Tigers prop Tom Bristow have both come on board recently, with the pair featuring for the Exiles in their 39-6 win over Ealing Trailfinders last Saturday.

Pitman has joined Welsh on loan, while loosehead prop Bristow is dual-registered.

"What these signings demonstrate to me once again is that London Welsh will leave no stone unturned to further strengthen its squad in the pursuit of success."