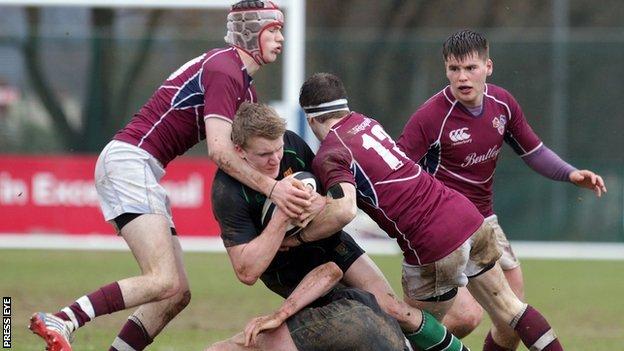 Sullivan Upper beat Coleraine Inst 27-14, in a match which saw both sides reduced to 14 men, to reach their first ever Schools' Cup final on Thursday.

Sullivan's Chris Jordan and Jake Scott of Coleraine were sent-off for an off-the-ball incident as tempers flared.

Scrum-Half McEwan put the Holywood side ahead at Queen's after charging down an attempted Coleraine clearance.

Out-half Adair missed the conversion but minutes later made amends by landing a penalty kick.

On the stroke of half-time hooker Crockford touched down after Sullivan's rolling maul put pressure on the Coleraine defence. Adair kicked the conversion to give Sullivan a 15-point advantage at the break.

Minutes into the second half second row Davidson bulldozed his way over the whitewash to score Sullivan's third try of the afternoon.

Inside-centre Shiels touched down and converted his own try to give his side a glimmer of hope but minutes later referee Stuart Gaffikin awarded Sullivan a penalty try converted by Adair.

In the closing stages outside centre Gordon spotted a gap in the Sullivan defence and sprinted towards the touchline to score a consolation try for Coleraine, which was converted by Shiels.

In the closing minutes Jordan and Scott both received red cards for an off-the-ball incident.

Sullivan held on to book their place in the St. Patrick's Day decider against Methodist College at Ravenhill.

Methody beat Wallace High in the first semi-final on Tuesday.