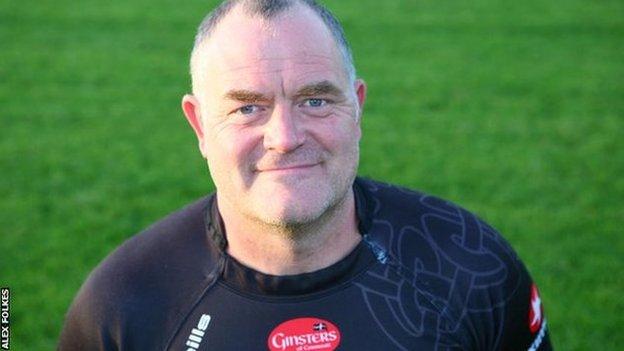 Former Launceston coach Cliff Rainford says the National League Two side should be focused on a top-half finish, not just avoiding relegation.

Rainford said he was "disappointed" to be sacked on Monday, with the Cornish All Blacks fourth-from-bottom with eight games remaining this term.

"If I was still in the job now, I'd be more than confident in staying up," he told BBC Radio Cornwall.

"I would still be setting targets of finishing in the top half."

Rainford continued: "Three games in anyone's favour can put you up six or seven places - with eight games to go it's by no means over yet."

Launceston lost four of their last five games under Rainford, the last of which was a 32-17 home defeat by Southend, who ended a five-game losing run dating back to 4 January.

Rainford said he was surprised to be axed, having lost just twice at home this term.

And while he had intended to leave his post at the end of the season, his dismissal ends his four-year association with the club.

"While my intents were always to stay at the club, it was made clear to me on Monday night that is not the case," Rainford said.

"I won't be staying, which is unfortunate because it's a great group players and supporters there.

"I was asked to go to the club four seasons ago, and as far as I was concerned I'd made that my club through the rest of my career in whatever form that would have been."

Prop Neil Bayliss has taken over as interim director of rugby at Polson Bridge, and his first match in charge is away to relegation rivals Chinnor on Saturday.