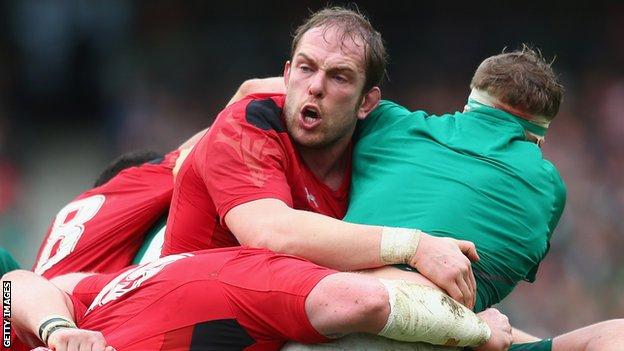 Alun Wyn Jones admits that he and Wales second-row partner Jake Ball will have a battle on their hands on Sunday against their England counterparts.

Ospreys star Jones says he has been impressed by England locks Joe Launchbury and Courtney Lawes.

The sides meet at Twickenham in what should be a titanic Six Nations match.

"Courtney Lawes and Joe Launchbury have probably been the stand-out second-row pairing in the competition thus far," said Jones, who will win his 77th cap.

"I think Launchbury, especially. If you look at the momentum-shifts he was able to produce against Ireland, he is playing like an extra back-row with the contribution he is making to their pack."

Wales got their championship defence back on track with a 27-6 win over France following a heavy defeat by Ireland.

England likewise recovered from defeat in France to hand Ireland their first defeat of the campaign.

That leaves the title race delicately poised, with Wales, England, Ireland and France all having two wins from three games going into this weekend's penultimate round.

"After the third round of games, the competition is wide open, with the four front-runners all having lost once," said Jones, who captained the British and Irish Lions to victory in the decisive third Test against Australia in 2013.

"Going away from home, your backs are against the wall.

"We are probably slight underdogs going into this because of the way we performed against Ireland and we realise just how much it is going to take for us to win.

"I think we do pretty well under pressure and since the Ireland game we have been under pressure. That is going to continue to grow, whatever happens at the weekend or leading up to the weekend."

They will arrive on Sunday following a record 30-3 demolition of England in Cardiff last season - a result that saw Wales claim the title and deny England a Grand Slam in the process.

"There is always going to be a lot said about the historical stuff [between England and Wales] and all that, but it is an opportunity for us to improve from that Ireland game," Jones said.

"The boys did that against France and now we want to kick on and bring the experience that we have.

"It is always a thing for the fans. They get up for it and there is always the banter on social media and stuff like that.

"People can enjoy that, but within the squad it is about working and the professional side of things, so we have to shelve that and move on.

"It is either going to be one of the attritional games where you trade [kicks], or it's going to be chucking it about and a lot of ball in play.

"Look at the back three they've got and the way they are playing at the moment, especially [England full-back] Mike Brown. It's going to be exciting stuff."

Jones missed that title-reviving Millennium Stadium victory against France due to a foot infection, but is restored to the starting XV with Ball coming in as a late replacement for the injured Luke Charteris.

"I had some antibiotics and fortunately enough it's all right now," Jones added.

"I had MRIs, X-rays, ultra-sounds, bloods, swabs - you name it, they did it all. I have been pretty fortunate with the level of care I've had, but it is just one of those things that happen and I've had to deal with."

Of the 124 previous meetings, England and Wales have each claimed 56 victories, with 12 draws. The last drawn game was at Cardiff Arms Park in 1983.