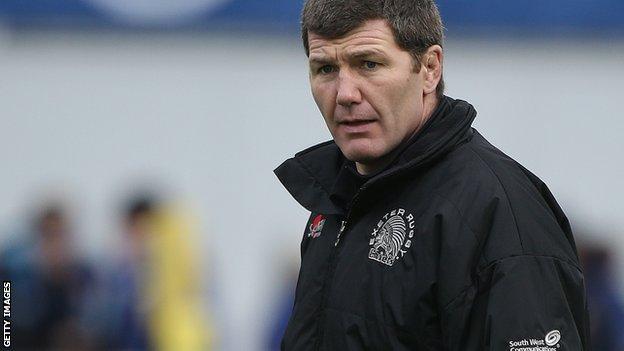 Exeter boss Rob Baxter thinks an honest assessment of their recent five-game losing run in the Premiership could help them reach a first major final.

"I don't need to motivate my players - they want to be in big games," Baxter told BBC Radio Devon.

"We have hit ourselves with a big dose from the honesty stick, because we want to be in semi- finals and finals."

Baxter added: "It has made us look at ourselves a little more forensically.

"We know we are a competitive side, we know a lot of things we have put in place work very well and we know we can compete against pretty much against anyone in Europe.

"Competing, enjoying the way we play and being there at the final whistle is okay, but, ultimately, for us to get to where we want to go we have to win a few more.

"I think we have looked at that more deeply these last couple of weeks.

"I'd like to think the tough run we had over the last couple of weeks against very good sides will ultimately be one of the things that drive us forward in the next three four years."

Before overcoming The Exiles 18-0 at Sandy Park, Exeter had lost seven of their previous eight Premiership games, dating back to 23 November.

Exeter's 18-0 victory over London Irish was the first time that the Chiefs have kept a clean sheet in the Premiership.

During that same period, however, they booked their semi-final showdown with Bath and produced a strong display against Toulon in the Heineken Cup.

"The thing that most motivates us as a team at the moment is that feeling of hurt and disappointment of probably letting a few games that we should have, and could have won in the last six to eight weeks, slip away," said Baxter.

"We have not appeared in the semi-final in top flight competition in the time we have been in the Premiership.

"There are plenty of motivating factors."