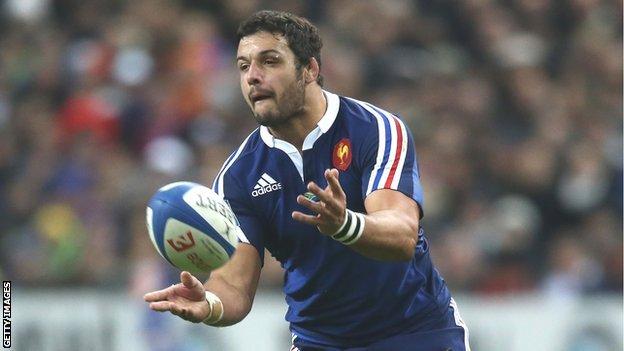 France wing Yoann Huget has suggested that Les Bleus will play conservatively against Scotland and not risk complacency at Murrayfield.

The French slumped to a 27-6 defeat in Wales but remain in the hunt for the Six Nations title.

"We can't pretend to ourselves that today, we're better than Scotland," said Huget.

"We will start well by taking our kicking game seriously and then we will see."

France started their campaign with victories over England and Italy and remain in the title mix along with Wales, England and Ireland, with the four teams all on four points from three games.

Coach Philippe Saint-Andre responded to their hammering in Wales by making seven changes to his team for the game at Murrayfield.

But Huget admits that the back division will have to perform better than they did in Cardiff.

"We are working hard and we have things in place, but we haven't made them work yet," he said.

"We coped better against England - we were in a rush against Wales - and the centres took part in recovering the ball.

"But it shouldn't be the case that a single grain of sand in the wheels stops us from getting going.

"We need to get the ball as far forward as quickly as possible with fast, accurate passes.

"And it's not a good idea to start taking risky shots in the opening minutes at a fiery Murrayfield."