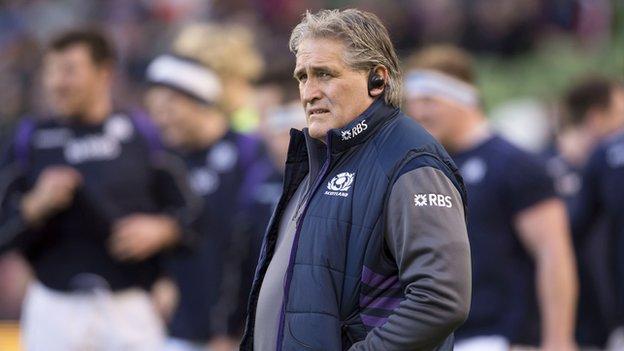 Scott Johnson has denied his team might be outmuscled by the French as he takes charge of Scotland at Murrayfield for the last time on Saturday.

Scotland lock Jim Hamilton described the visiting pack as "monstrous" but the interim head coach preferred to focus on his own team's assets.

"We are a big pack of forwards," he said ahead of the Six Nations match.

"We are not the wee Scottish boys. We are a big pack and we've got to start playing big."

Hamilton at 6ft 8in and Richie Gray, two inches taller, are the giants of the Scotland team and will come up against towering French forwards Pascal Pape, Yoann Maestri and Sebastien Vahaamahina.

"They have picked a huge, huge team," said Hamilton.

France coach Philippe Saint-Andre has made seven changes to the team that lost 27-6 to Wales in their last match.

That defeat followed wins over England and Italy and, after three matches, the French are on the same points as Ireland, England and Wales.

"They are a very good rugby nation," said Johnson. "We know we have to lift our game to beat them.

"The set piece plays an integral role in the success of our team and so does the tackle area, and our defence has to hold.

"If we do that right, we're in the contest. This is a contest that will go to the wire."

Hamilton hopes the team can build on after heavy defeats by Ireland and England.

"We are not getting carried away with the performance in Italy," he said.

"It was far from perfect but, coming off the back of a win, it gives a bit of confidence and confidence is huge at this level.

"Any French team you play, you can never say they are going to be a soft touch.

"They've got some fantastic players, they've got aggressive players. The size of their pack's monstrous and, not that I'm worrying too much about their backs, they have guys who can score from anywhere."

Johnson still has the match in Wales on 15 March to look forward before he hands over the reins to Vern Cotter and takes on the role of director of rugby at Murrayfield.

"I've loved my time in Scotland," he said.

"Trying to get an outcome we all want takes a little bit of time. It's been a good challenge. We are still competing in games and we are getting the next generation through.

"We all want sustainable success. We've got to change it a little bit. We want to be competitive regularly. It means we do some things for a couple of years further down the track.

"Over the past 12 months we've had a lot of young players in. We wanted to make sure we had the right mileage on the clock for some of the younger players. We didn't want to go to a World Cup with boys making their debuts.

"I think you'll find some of these younger players will go on very quickly. We've seen the development as Jonny Gray and Grant Gilchrist as locks. I think they'll form a really formidable pairing in years to come.

"We've got competition in the back row and centres who are developing and competition is good for the dynamics of the team."