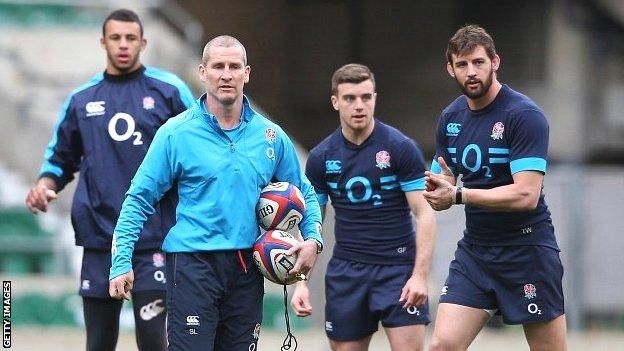 England coach Stuart Lancaster believes victory over Wales to secure the Triple Crown at Twickenham on Sunday can have an impact on next year's World Cup.

Both teams have four points in this year's Six Nations and meet again at Twickenham in World Cup Pool A in 2015.

"We play Wales twice before the World Cup and Wales play Australia [who are also in Pool A] - psychologically there will be things there," Lancaster said.

"It's a big game and we need to make sure we deliver on the field."

England have lost their last three internationals against Wales, who clinched last year's Six Nations title with their highest winning margin against England, a 30-3 triumph at Cardiff.

With two matches remaining in this year's tournament, Ireland and France also have four points, with the Irish team top of the table on points difference.

Lancaster's team recovered from a last-gasp opening 26-24 defeat in France to defeat Scotland 20-0 and Ireland 13-10 and are seeking their first Triple Crown since 2003.

Victory against Wales would also put them in position to win the Six Nations for the first time since 2011, with a visit to Italy in their final match the more favourable of the final fixtures amongst the leading teams.

"You use every defeat as motivation on how to improve. We lost to New Zealand in the autumn and that was difficult to take, as was losing to France last month," Lancaster said.

"But we've bounced back from those games and learned, liked we learned from Wales last year. We've moved on since then.

"We respect Wales as opponents, the quality and experience they have and how well they are set up. It will be a tough game, but we're ready.

"All the talking is fine, it's the team that delivers on the day that matters."