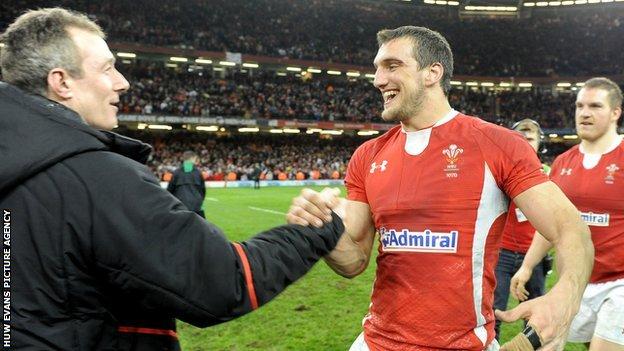 Wales must find "another level" to beat England in the Six Nations on Sunday, says backs coach Rob Howley.

The success was sealed with a one-sided 30-3 defeat of England in Cardiff.

"There's another level in our game. And I think we saw the end product in the level last year, in the last game of the Championship," said Howley.

"That's the level we need to go to [against England]."

Howley went on to be part of Gatland's Lions coaching team as they recorded a 2-1 series win over Australia.

Ben Morgan is a great carrier, and we have talked about closing his space down

New Zealander Gatland is now back in charge of Wales as they seek a record third successive title.

England go into Sunday's clash at Twickenham seeking a first Triple Crown for 11 years and whichever side wins will be in contention to win the title in the fifth and final round of matches.

Howley, himself a former Lion, said: "In normal games of this magnitude, your performance has to go up 10-15% and an experienced team is hopefully able to go to that 10 or 15% because they have been there before.

"This group of players has been together for a period of time now. They have played and won away from home, and that obviously gives you confidence.

"It is a totally different game one week to the next, and I suppose it is the side that gains momentum, and then under that pressure of the cauldron of Twickenham is able to continue the momentum.

"I am sure the atmosphere is going to be similar to last year, but very much England-loaded.

"We have to deal with that, and the more experience you have of going away and winning, hopefully you become automated and are able to switch off that outside influence and be very tunnel-visioned in terms of your skill-set, technically and tactically."

Wales lost lock Luke Charteris to a neck injury on Friday, with Scarlets forward Jake Ball, 22, coming in to win his third cap.

Howley says he is surprised that powerful England centre Manu Tuilagi is not involved, having recovered from a pectoral injury that had sidelined him since September.

The former Bridgend, Cardiff and London Wasps star also says England have a similar number eight replacement for Billy Vunipola in Ben Morgan, but has warned Wales of the influence half-backs Danny Care and Owen Farrell could have.

"I am quite surprised that Manu Tuilagi hasn't come in, having worked with him [with the Lions] in the summer. I thought he was outstanding," said Howley.

"He is a potent attacking threat. I know he has lacked some rugby, but there is an X-factor about Manu.

"Ben Morgan and [Billy] Vunipola are similar players in terms of their ball-carrying and work-rate.

"Ben Morgan is a great carrier, and we have talked about closing his space down. He fits that mould Billy Vunipola has given England - it is like for like.

Howley added: "Danny has been instrumental in terms of the tempo and speed of the [England] game and running from the base.

"It is not only the breaks that he makes. He has got a good relationship with Owen Farrell, and their kicking game is pretty effective.

"It is something we have talked about. The game is going to be about small margins."