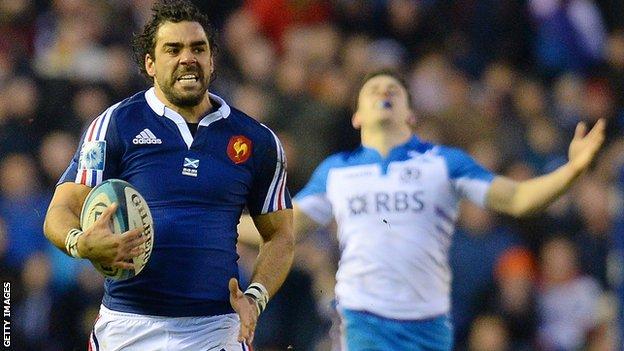 There are two ways Scotland fans can view the defeat by France at Murrayfield.

Optimists will be buoyed by the spirit and intent shown by their side, especially given the insipid display against England a month ago.

Pessimists - some might say realists - will marvel that their side were unable to derail one of the most ramshackle French sides ever to wobble into the Scottish capital.

Scotland head coach Scott Johnson is a relentlessly upbeat fellow, the type of man who would praise the ingenuity of his assailant following a mugging.

But after his side's last-gasp mugging by France, Johnson sounded far less generous, spending roughly half of his post-match news conference speculating about the performance of New Zealand referee Chris Pollock.

"I'm not into bagging referees, and we've got to take some responsibility," said Johnson, who has come in for some fearsome criticism from the Scottish media throughout this year's Six Nations Championship.

"But it's frustrating that no crumbs seem to be coming our way," he added. "That was a game we should have won."

Pollock awarded 13 penalties against Scotland, nine in the first half. But he isn't the first official to see infringements where Johnson sees none: Scotland gave up 38 penalties in their first three games of this year's tournament, more than any other team.

Rather, the mounting penalty count is evidence of a naivety that runs through this Scotland outfit. A naivety that saw them lose 19-17 despite having 58% of possession, 58% of territory and dominance of the line-out and scrum.

"Everything good and bad that happened was Scotland's doing," was former Scotland scrum-half Andy Nicol's take on the game. Indeed, there were periods when you almost forgot France were taking part.

Having abandoned their tradition for flair, France are fast garnering a reputation as a side who are able to bumble their way to barely deserved victories.

Head coach Philippe Saint-Andre replaced Marc Lievremont with a brief to restore some kind of order to the national side. But having made seven changes to the starting XV thumped by Wales a fortnight ago, a cohesive start by the makeshift French curdled to confusion throughout their ranks.

Starting hooker Brice Mach had a bona fide shocker, the Castres man losing five throws in a row in the first half. France's scrum disintegrated worryingly after the break.

But just as Scotland were about to cut off France's lifeline, the scalpel slipped. Fly-half Duncan Weir, whose last-gasp drop-goal stole victory against Italy in Rome, threw a needless miss pass and Yoann Huget romped home. Johnson wasn't exaggerating too much when he called it a "14-point swing".

Still Scotland should have won it, Weir having given them the lead again with a penalty. But there were too many sweaty hands in the operating theatre when things got tense.

The boos that rang out after the final whistle were directed at the referee rather than the Scottish players, who could not be criticised for a lack of fight. The fans also witnessed dashes of class, in the form of well-taken tries from Stuart Hogg and Tommy Seymour in 10 first-half minutes.

Yet the result was all too familiar. And which was more dispiriting? The resounding defeat by England last month, when Scotland went down to a well-drilled side with barely a whimper? Or the narrow defeat by France, when Scotland gave it their all but still lost to one of the worst French teams anybody can remember?

One of the worst French teams anybody can remember, but still in with a shout of winning the Six Nations title heading into the final week.

Former Wales fly-half and BBC pundit Jonathan Davies was onto something when he said it would be a "sad indictment of the game" if France manage to topple Ireland next Saturday. Just as it would have been a terrible outcome had they managed to beat a nervy New Zealand in the final of the 2011 World Cup.

"I hope the Brian O'Driscoll party was today in Dublin, not next week at the Stade de France," said Saint-Andre, referring to the Ireland legend's last international in Dublin, the 46-7 defeat of Italy on Saturday.

Not too many rugby fans outside of France will agree. Victory for Ireland would not only give O'Driscoll the send-off he deserves, it might cause those in charge of French rugby to go in for some welcome soul-searching.