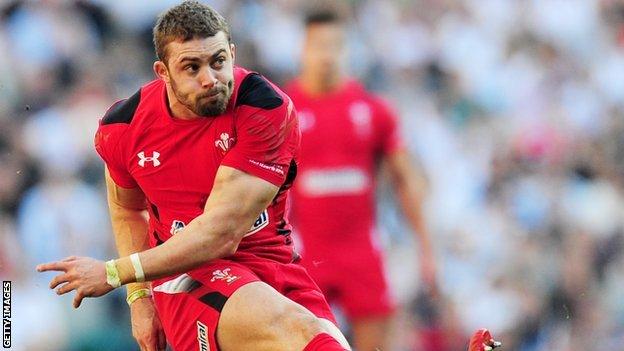 Wales full-back Leigh Halfpenny is to have an operation on his injured right shoulder which will rule him out of action for up to 16 weeks.

It means he will miss Wales' summer tour to South Africa, and will not play again before joining Toulon.

Halfpenny dislocated the shoulder tackling centre Luther Burrell in the 29-18 defeat by England at Twickenham.

Ospreys scrum-half Rhys Webb limped out of the game with an ankle injury and is being assessed by his region.

Halfpenny will undergo surgery on Friday, with his place in Wales' team to face Scotland in the Six Nations on Saturday going to Scarlets' Liam Williams.

The injury to Webb sees Racing Metro scrum-half Mike Phillips recalled to a starting line-up that sees six changes from the side beaten at Twickenham.

Wales will play two Test matches against South Africa in Durban on 14 June and Nelspruit on 21 June.

Halfpenny, 25, won a host of awards in 2013, including Six Nations player of the tournament and player of the series when the British and Irish Lions claimed a 2-1 victory over Australia.

The timing of the injury means he's played his last game for Cardiff Blues, having already agreed a transfer to reigning European champions Toulon.

However, Wales coach Warren Gatland explained Halfpenny will undergo a serious surgical procedure on Friday and faces a long period of recovery before moving to France.

"I think they've got to go in the front and then put the capsule back on the shoulder, and tighten some ligaments and stuff like that," he said.

"He has put his body on the line in stopping a certain try, and unfortunately he has damaged his shoulder.

"He will have the best wishes of everyone."