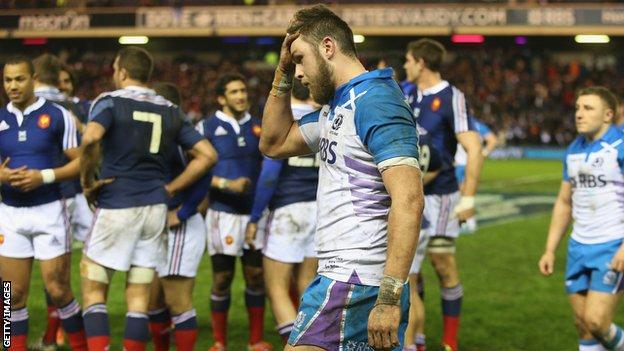 After the Gaul came the gall. Scotland's propensity to load the revolver and empty the chamber into their own feet was never more evident than in the closing minutes at Murrayfield on Saturday.

Here was a team that had France where they wanted them. They had the lead and the momentum. They had the ball and the crowd roaring them on. What happened next was Scotland in microcosm - a penalty machine dressed in white.

France did not have to do a lot to win this game. In those dying minutes all they had to do was stay alive long enough for Scotland's discipline to go.

In the aftermath, Scott Johnson made a big play of the penalty count and how lop-sided it was: 13-5 against his team.

He said something didn't "smell right" about the way Scotland are being refereed in this championship, but it was a stretch. Sure, some of the penalties against Scotland have plainly been wrong, but every international coach in the world sings that same tune from time to time.

Scotland have been singing it for a year. In their last nine Six Nations matches they have finished on the right side of the penalty count only once. They have conceded 51 in their four games so far - the most in the championship. Last season they coughed up 65 in five matches: an average of 13 per game.

Ireland have not conceded 13 penalties in their last two games combined. That's what the top teams do. They recognise that trying to win Test matches is tough enough without giving yourself the added burden of climbing a penalty mountain.

This is a recurring theme. Either this is a grand refereeing conspiracy against Scotland (it's not) or Scotland are not learning the lessons they ought to be learning. And on Saturday, it cost them.

So many things cost them but, in this tale of woe, Duncan Weir is the headline act.

It's not that often you can legitimately say that a game's turning point came so early in a match, but Weir's 45th-minute intercept was such a moment. His ruinous lack of awareness, his head-strong rush to get the ball wide and exploit the overlap killed Scotland.

You exploit an overlap by putting the ball through the hands. In rugby's coaching manual it's chapter one. A basic.

Consider the seismic difference a Scottish try would have made at that time. France were reeling. They had shown nothing. Their lineout was an abomination, their tackling passive, their threat non-existent.

They were 14-9 down on the scoreboard and had Weir executed what amounted to an open goal in football parlance then Scotland would have eased their way out to 19-9 with a conversion to come.

Given the problems in this French team, the smart money would have been on them running out the gate at that point. They were already teetering on the brink.

Yoann Huget's breakaway score pulled them back from the precipice - and Scotland presented it to them on a plate. It was a catastrophic blunder that gave the French a reason to believe when they should have been given a reason to abandon hope.

France were woeful, a fact that will only add to Scotland's pain. The visitors lost eight line-outs. To put it another way, they lost 57% of their own line-out ball.

For reasons of injury and suspension, they had gone into the game without their best centre, Wesley Fofana, and their best scrum-half, Morgan Parra, as well as their two best hookers and their top five back-row forwards, the colossal Louis Picamoles among them.

They had a hooker making his first start and who looked terrified every time he had to throw into the line-out.

They had a pair of half-backs starting together for the first time and they looked a rank average combination.

The visitors' had lost five away matches in a row in the championship for the first time since the 1960s. They had just been handed their biggest walloping by the Welsh since 1950. On at least two occasions at Murrayfield, you could see them bitching at each other.

Until that intercept, they looked like a team that was close to packing it in.

Rugby is a brutally physical game but it's a psychological war also and when you have a team in trouble you'd better make it count. Scotland didn't - and it rattled them.

Johnson could have changed it. He could have brought Chris Cusiter's pace and energy on earlier - and should have. But when a team has a death-wish it's hard to win Test matches, even against a side as dreadful as France.

One game to go in this turbulent championship. One week for the Scots to remove the shrapnel from their feet and address the penalty count crisis that is crucifying them.