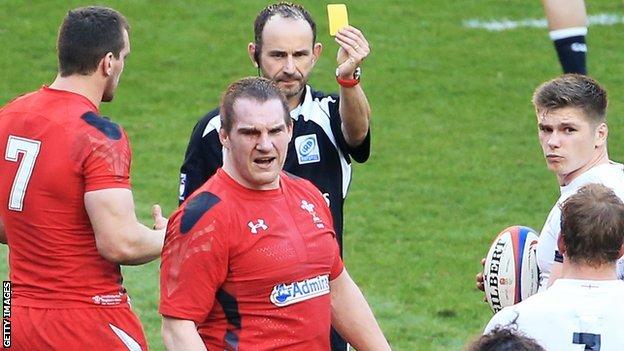 Wales coach Warren Gatland said Gethin Jenkins opted not to return after his sin-bin in the 29-18 defeat by England.

"Gethin sent a message up to us after the yellow card: was it prudent for us to send Paul James on because he felt that... personally he had been singled out," said Gatland.

"And so I think it was a lot of experience shown by him to make that call."

Bath prop James impressed with his scrummaging after coming on 10 minutes after Jenkins' departure in the defeat that ended Wales' Six Nations title bid.

McBryde felt the rival Twickenham scrums were "evenly-matched", adding: "I didn't think the difference was that glaring that it warranted a yellow card.

"I'll be speaking to Joel with regards to getting clarification of one or two things."

And Gatland felt Wales had the upper hand at the set-piece.

He said: "We didn't feel like it was obvious to us that he was going to be yellow-carded.

"We felt that it was some dominance for us at scrum-time.

"He's [Poite] ruled that Gethin's been taking it [the scrum] around on his side. That's the way that he's interpreted."

Wales captain Sam Warburton said Poite made his feelings clear on their scrum, speaking to the trio of Adam Jones, Richard Hibbard and Jenkins several times before producing the yellow card.

Warburton said his players were "well aware he [Poite] wasn't favouring us in the scrum, so they knew the potential outcome of another penalty".