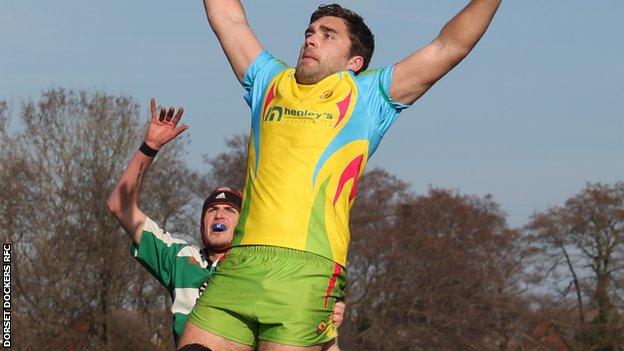 It's brilliant to have a record like that. It's not expected but the boys deserve it

They ran in 32 tries, scored by 16 players, during the match in Verwood.

"My reaction was disbelief and amazement," chairman Jeremy Cook told BBC Radio Solent. "It was a great day and hope it will carry on for the remainder of the season.

"I had no intimation this could happen. We train hard in the week, we do what we can to make rugby exciting and it was one of those days where we managed to pull it all off.

"To be fair to the opposition, they carried on and played their hearts out, but it was one of those days where everything came off."

Dockers were only formed in the summer, but are currently top of Dorset & Wilts League Two South in the ninth tier of English club rugby with a 100% record of 16 victories so far this season.

"It's brilliant to have a record like that," added Cook. "It's not expected, but the boys deserve it."

The margin of their latest victory was a surprise as Dorchester only lost this season's first game between the sides 51-5 - previously the highest number of points they had conceded - and are fifth in the table with 10 wins to their credit.

However, the Dockers' score was well short of the world record set by French Third Division side Lavardac, who defeated Vergt 350-0 in 1984.

The leaders return to action against Oakmeadians II on Saturday in Bournemouth. a side they beat 128-0 earlier in the season.