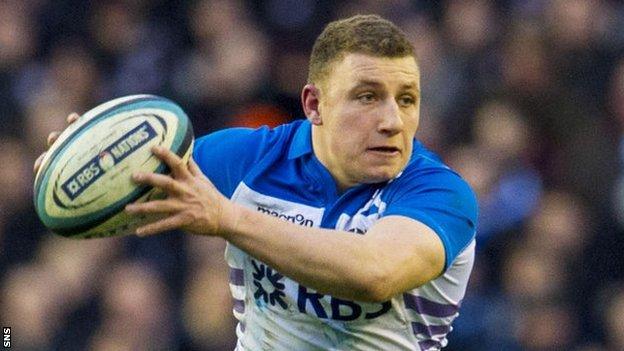 Scotland fly-half Duncan Weir has signed a contract extension to stay with Glasgow Warriors until the summer of 2016.

The announcement of his new deal comes two days after his poor pass led to a France try in Scotland's 19-17 Six Nations defeat on Saturday.

The 22-year-old said: "It was an easy decision for me to stay.

"I was born in Glasgow and I'm very proud to be playing for my local club and representing my country."

He has made the Scotland number 10 jersey his own this season after recovering from a broken leg, starting all four Six Nations games this season, but does not take his club starting place for granted.

This is really good news for us and for Scottish rugby. He has a big role to play at the club over the next couple of years

"We have a really strong squad, with a lot of competition for places, and it's great to see so many young players coming through," he said.

"Now that this has been agreed, I'm looking forward to a successful end to the season, as we try and reach the play-offs once again."

Saturday was the second time when Weir has been in the spotlight during the Six Nations this season, his 80th-minute drop goal securing a 21-20 win over Italy in Rome.

Warriors head coach Gregor Townsend was delighted at the new deal and said: "This is really good news for us and for Scottish rugby.

"He has made a great return from injury this season and has been a consistent performer for the club and for Scotland during this year's RBS 6 Nations.

"His drop-goal to win the Italy game was top drawer and he has shown that he can operate at the highest level of the game.

"Duncan works hard at getting better every day at training and he's made great strides in both the technical and tactical side of playing at stand-off.

"His ability to lead the attack is beginning to become a real strength of his game.

"He has a big role to play at the club over the next couple of years."