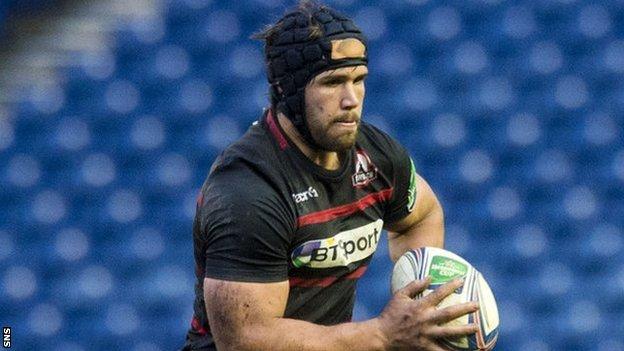 Lock Izak van der Westhuizen is to leave Edinburgh at the end of the season and return to his native South Africa with Eastern Province Kings.

The 28-year-old, who joined the Pro12 club in October 2012, has cited family reasons for the decision.

"I'm settled in Edinburgh and really enjoy the city," he said.

"But I'm from a very tight-knit family and the chance to be closer to them was one of the biggest, most important, reasons."

He only turned out six times for Edinburgh during his first season after being hampered by an ankle injury.

But Van der Westhuizen has now made 19 starts in his 24 appearances for the club.

"I've really enjoyed my time at the club, especially in the last couple of months without injury," he said.

Six months ago, Van der Westhuizen and his wife, Bonita, celebrated the birth of a daughter and he explained the chance to move closer to home played a big part in his decision as "we'll be a one hour away instead of 11".

Edinburgh head coach Alan Solomons praised the contribution his compatriot has made while in Scotland.

"Sakki has done a splendid job for us this year and will continue to do so until the end of the season," he said.

"An opportunity has presented itself back in his home country that suits him and his young family.

"I'm sure he will make a valuable contribution at the Kings."