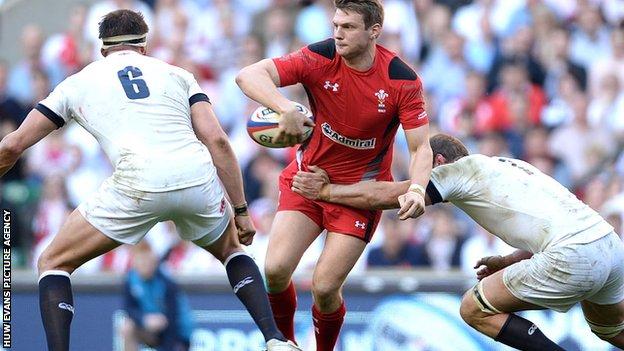 But former wing Williams thinks there will be more changes for Saturday's game against Scotland in Cardiff.

"I think certainly Dan Biggar will be looked at in place of [fly-half] Rhys Priestland," said Williams.

"And I think we'll see one or two changes in the forwards."

They have won two of their four matches this season, while opponents Scotland have been victorious just once - against Italy - and were beaten by a last-minute France penalty at Murrayfield at the weekend.

Gatland was due to name his line-up on Tuesday, but delayed the announcement until Thursday after hinting he would be prepared to make changes after the disappointing display against England.

And Williams, who scored 58 international tries, expects the team to have a fresh look.

"I think we will see a couple of changes in key positions," said Williams, 37. "We're going to have a new 15 and 9 on Saturday because of the injuries to Leigh Halfpenny and Rhys Webb.

"And I thought the impact made from the bench was positive for Wales [against England].

"Ken Owens played really well as did Paul James, so there's a lot to think about for Warren Gatland this week."

Loose-head prop Gethin Jenkins, who equalled Stephen Jones's Wales cap record of 104 at Twickenham, was sent to the sin-bin for the second match in succession for scrummage infringements.

And Wales' kicking tactics have been heavily criticised.

"I thought the attitude more than anything was the problem, particularly at the start of the English game," said Williams.

"England looked very fluid in what they did and they looked to be enjoying playing rugby, whereas Wales didn't seem to have any ideas whenever they had the ball. So there's certainly some kind of tactics that need to be changed and readdressed.

"It wasn't a game for the Welsh back three, that's for sure.

"[Wing] Alex Cuthbert was almost redundant except in defence and it felt to me that Rhys Priestland and Rhys Webb kicked the ball to [England full-back] Mike Brown far too often.

"And if you are going to kick to a player of Mike Brown's ability you have to compete or make sure that the chase is as good as the kick - and on Sunday it wasn't."

Warren Gatland names his team to play Scotland at 11:00 GMT on Thursday, 13 March.