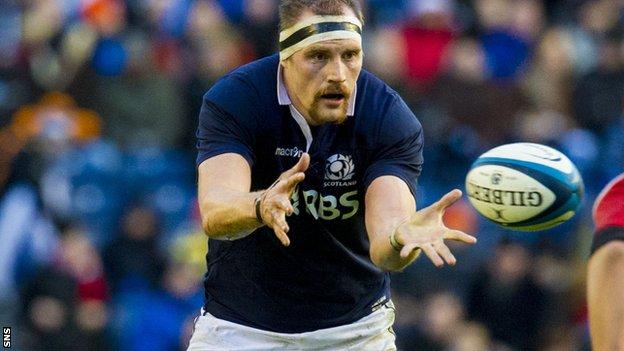 The Glasgow Warriors forward, sidelined with an arm injury, has been a frustrated spectator as the Scots have recorded just one win.

"We've seen some real positives in the Six Nations and some moments we'd like to forget," he told BBC Scotland.

"It'd be great to leave the tournament with a bit of momentum."

Last weekend's 19-17 defeat by France at Murrayfield was sore to take for Scott Johnson's side after running in two tries.

And they will seek victory against Wales in Cardiff in their final game of this year's campaign, having registered one victory - away to Italy.

"I felt some of the stuff we did was really good," Kellock added. "Our back line especially looked more dangerous.

"If you can say that about the French then you're doing very well. The guys are disappointed they've not managed to close it out at the end.

"I'm sure they'll look at the review and a number of things they could've done slightly differently, and it could've been a victory.

"For a big percentage of the game we were very dangerous. If you look at our two tries, we're a difficult team to play against. The French defence was stretched and there were a lot of positives to take."

France wing Yoann Huget scored an interception try after a miss-pass by Duncan Weir but Kellock has backed his Scotland and club team-mate to recover from the blow.

"It was crucial," said Kellock. "It was a massive moment and it also gave them a bit of momentum going into the final stages of the game.

"He's got to mature and I think he's done that brilliantly over the Six Nations. He's had a good run of games and got that drop-goal against Italy.

"He's just got to bounce back as quickly as he can and move onto this week."

Regarding Scotland's high penalty count in the Six Nations, Kellock said: "We have to get better at is playing the referee. So, you go into a game and have an idea of what the referee's going to penalise you for.

"If something else is happening then you've got to be able to fix it at the time on the park because every referee's different."

Wales will be without full-back Leigh Halfpenny, who dislocated a shoulder in the defeat by England.

"First and foremost it's a shame for him," said Kellock. "But I suppose it's a boost for Scotland. The guy is a fantastic player; take him out of any team and it'll be a boost for the opposition."